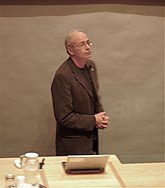 If philosophy and ethics go tits up, he can probably earn a good living as a babysitter and dog walker.

Peter Singer (6 July 1946–) is an Australian professor of bioethics at Princeton University, and is generally considered to be the intellectual great-granddaddy of the animal rights movement. He is an atheist and a utilitarian - who takes utilitarianism to levels which make some people uncomfortable.

Singer is best known for his book Animal Liberation (published in January, 1975) which has been cited as one of the most influential texts in the animal rights movement. His central message in the book is an expansion of the utilitarian idea that action is right if it promotes happiness of everyone affected by it. Singer argues that there is no reason not to apply this to other animals - utilitarianism takes into account only pain and pleasure and animals can also experience pain and pleasure. As such, Singer completely rejects the idea that humans are a "special" animal.

Although Singer is a professed vegetarian, he does not believe it is wrong in principle to kill animals for food. Since most animals likely have no concept of death, they cannot have a desire to go on living. Therefore, in and of itself, killing animals is not wrong. Nonetheless, Singer still opposes meat-eating, since although the animals have no preference to not die, they do have a preference to not feel pain - and the processes of farming and slaughtering will inevitably cause them pain, thus violating their preferences.

Singer is too moral to eat meat, but he doesn't find anything unethical about killing disabled newborn babies.[2]

He claims that foetuses are full human beings,[3] but he thinks that it does not in itself tell us whether it is wrong to take that being's life. This is because philosophers distinguish human beings from "persons" (who are bearers of moral rights). Similarly, he argues - via utilitarianism - that a period of 28 days after birth might be allowed before an infant is accepted as having the same right to life as others, because newborns lack the essential characteristics of personhood — "rationality, autonomy, and self-consciousness".

More specifically, Singer is a preference utilitarian - he believes that every being's preferences should be treated equally, and we should aim to fulfill as many beings' preferences as possible. This leads to the conclusion that it is wrong to kill any being that does not want to die. However, since infants do not have any desire to live or not to die - they have no concept of what life or death are - according to Singer, it is not wrong in itself to kill an infant. Now, although the infant does not have any desire to live, there are others who would normally want it to go on living, such as its parents. So, Singer concludes, it normally is wrong to kill infants - but the wrong is not committed against the infant, but against their parents who want the child to go on living. But, in circumstances where the parents do not want the child to live - such as euthanasia for a severely disabled infant - Singer concludes that killing the infant is not wrong. As the child grows older, it will begin to learn what death is, and will form a preference to go on living and not to die. At that point, but according to Singer not earlier, killing the child becomes a wrong against the child itself, as opposed to just a wrong against others who love the child.

His comments about disabled babies makes him very unpopular in Germany.[4]. For his views on abortion and embryo selection Peter Singer has also been accused of supporting eugenics.[5]

If infanticide seemed benign, Singer argues more generally that, in order to maximize utility, certain individuals may be killed and “replaced” with happier alternatives, leading to a variety of morally repugnant conclusions. For example, an intellectually disabled child may be killed and replaced with a healthier, presumably happier child. Lacking an adequate conception of their future, animals may also be killed, provided they live generally pleasant lives, are killed painlessly, and are replaced with organisms of a higher utility. Michael Lockwood goes so far as to propose a service named “Disposapup” which sells and euthanizes puppies at the whims of their owners. Most disturbingly of all, none of these possibilities are objectionable within Singer’s preference utilitarianism and are, in fact, morally required, provided they increase overall utility.

Singer, however, egregiously discounts the interest in remaining alive, which most organisms share, and which we are often paternalistically obligated to honor. He also discounts the impacts on society of routine murder, including a disrespect for life and a callousness toward the suffering of others, which, rather than increasing utility, may result in a net disutility. He also ignores the possibility that defective beings may, in fact, be happier than their less defective counterparts; a meandering existence of various and continual satisfactions may, on the whole, be more rewarding than a life which incorporates anxiety over future events and existential crisis. Finally, he selects a questionable criterion for moral consideration. Namely, the lack of a well-formed conception of one’s future is an insufficient ground on which to dismiss the value of one’s life, especially to that individual, so utterly that termination is of no significance beyond utility. If it were, we would be perfectly justified in killing Clive Wearing, whose memory spans no more than twenty seconds, and who accordingly lacks any substantive conception of his future, provided we killed him humanely and “replaced” him so as to increase overall utility.

Against these criticisms, Singer’s preference utilitarianism could be made more amenable. He could, for example, account for the interest in remaining alive, the impact of routine murder on society, and the subjective value of one’s life, to the conclusion that murder, on a utilitarian basis, is slightly more difficult to justify. But even after accounting for these variables, his approach to ethics would still suffer from those problems endemic to utilitarianism, namely epistemological problems encountered in quantifying the subjective experience and a general disregard for the value of life.

Singer is a strong proponent of effective altruism and says that he personally donates one third of his salary to charity. In 1971, as a young man, he wrote a paper, "Famine, Affluence and Morality", in which he put forward two positions on a secular ethical requirement to donate to people in need, one of which was that people should donate up to the point at which donating more would cause them or their dependents to suffer even more than the people they were helping had been suffering, and wrote that that position seemed to him to be "the correct one". However, recognising that position as ludicrously unpopular, he has never pushed for the wide acceptance of it, not even in that paper.

Unlike Singer, however, Arthur articulates the duty to bring aid as an obligation to benevolence, as supererogatory rather than strictly necessary, to the apparent deficit that self-interested, egotistical individuals might refuse to give aid by assigning unrealistically high values to their material possessions. En masse, such individuals could perpetuate the radical inequality we observe in the modern world.

Singer believes that so-called consensual bestiality should not be a crime.[6]

He has argued that a woman who had sex with a severely disabled man, unable to consent, in fact didn't rape him. Why? Well according to Singer the man probably enjoyed it and, well, if he can't consent then therefore she couldn't have violated his personal autonomy.[7] She was described as an "honest and honorable woman in love".[7]