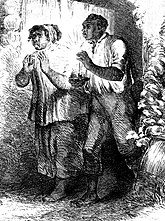 The term Uncle Tom (also House Negro in African American circles or Internalized Misogynist in feminist circles) is a commonly-used term in social justice circles to refer to members of oppressed groups who devote their time and energy to justifying why their oppression is either benign, preferable or justified. They're oftentimes commonly used as political ammo by reactionaries to claim that their beliefs are right and that they aren't bigots. It's the ultimate form of internalized oppression or internalized discrimination.

[2] In the novel, African American slave Tom is beaten to death for refusing to betray the whereabouts of two other slaves.[3] While he was a hero in the book, the play adaptation portrays him as a cringing lackey of his master.

Along these lines, Malcolm X famously made an analogy describing the difference between a 'House negro' and 'Field negro'[5] The 'House Negro' as described shared many of the benefits of their Masters and thus were subservient and reluctant to rock the boat while the 'Field negro' toiled in the fields and longed for change. Malcolm X contended that a modern day 'house negro' existed, a modern day Uncle Tom, consisting of Black people who identified more with the white establishment than their fellow black brethren.