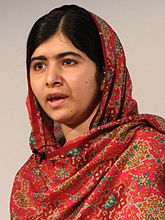 Malala Yousafzai (1997–) is a Pakistani activist for girls' education. When she was a schoolgirl in October 2012, she was the target of an assassination attempt by the Pakistani Taliban. Since then she has been living in Birmingham, United Kingdom, both to continue medical treatment and to protect her against a repeat attempt on her life.

Yousafzai won the Nobel Peace Prize in 2014. At age seventeen, she is the youngest Nobel laureate in history.

Yousafzai was born in 1997 in the Swat region of northern Pakistan. Her father, Ziauddin Yousafzai, is himself an education activist and runs a network of schools in Pakistan. "Yousafzai" is not truly a Western-style surname, but the name of Malala and Ziauddin's tribe.

When Yousafzai was 11, the Pakistani Taliban took over the region. They came in the night (much like vampires) and gradually introduced Sharia law, forbidding music, requiring women to be veiled in public, and closing girls' schools (probably worse than vampires). During this period, Yousafzai began writing a blog for BBC Urdu, detailing her experiences.

Prior to the attempt on her life, Yousafzai had received death threats. She was shot by a Taliban gunman on October 9, 2012 after taking an exam.

Yousafzai survived the attack. Following the attempt on her life, she became a peace activist advocating education, feminism, and rights for young women in the Muslim world. Subsequently, she wrote a book titled I Am Malala, which detailed her experience and outlined her views on human rights. Yousafzai met with many world leaders, including President Barack Obama. Madonna got a temporary tattoo dedicated to Malala as well, in support and honor. [1] She has been favorably compared to Holocaust diarist Anne Frank.

This social justice-related article is a stub.
You can help RationalWiki by expanding it.
Retrieved from "https://rationalwiki.org/w/index.php?title=Malala_Yousafzai&oldid=2490039"
Categories:
Hidden categories: