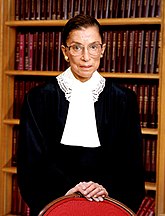 Ruth Joan Bader Ginsburg (March 15, 1933 - September 18, 2020) was a United States Supreme Court Justice and the first Jewish woman to serve in this capacity.[1] Part of the court's liberal wing, she was the only American Supreme Court Justice who has ever carried a powerful feminist voice. Prior to her appointment to the Supreme Court in 1993,[2] Ginsburg was an attorney for the American Civil Liberties Union; she was the founder of their Women's Rights Project. As the oldest liberal Justice, this Clinton appointee was the last civil rights lawyer on the Court. She often wrote dissents in politically charged cases.[3]

As a judge, some of her comments in the political sphere have gained somewhat unwanted attention for Ginsberg. In 2016, a fake quote was put about by supporters of Donald Trump, claiming that Ginsberg would resign if Trump became POTUS. This was based off comments Ginsberg made about "the next president, whoever she will be," which was obviously seen as an attack on Trump. The website making these claims was a "hybrid" site of truthful and satirical news.[4] In the same year, she also called Colin Kaepernick's refusal to stand for the national anthem "dumb and disrespectful," whilst arguing that it was within his constitutional rights to do such a thing.[5]

In 1975, RBG suggested that the Equal Rights Amendment shouldn't be opposed because of the "potty issue". This statement was about the manufactured fear that a constitutional amendment barring sex discrimination would force the creation of unisex bathrooms.[6] Though, this view is clearly transphobic it would be fallacious to state that she has held this view in modern times.

Justice Ginsburg was one of four dissents to Bush v. Gore. She outlined what has been seen by many as a clear violation of the role of the SCOTUS, and did not hold back in her written dissent to chastise the Court at large. She stated in her opinion:

She wrote the opinion in Stenberg v. Carhart (2000), where she commented that Roe v. Wade may have actually hindered women's rights, by making into "soft law" that which should have been legislated. While it was, she states, the right thing to do at the time, judicially, it caused a backlash because it was only a ruling by the Court and not the law from elected representatives.

In 2007, she wrote two scathing dissents, one in Gonzales v. Carhart (in which the majority upheld the ban on late-term abortions) chastising the Court for treating women as second class citizens, belittling their intelligence and ability to make decisions, and treating them like children by saying that the State must protect women from bad choices.[note 1]

In 2014, she wrote a fiery dissent in Burwell v. Hobby Lobby which gave corporations religious rights. Her dissent centered on the dangerous precedent the court had set by broadening its definition on "religious liberty" and the burden it would levy on women's rights.

On a woman's reproductive rights:

On her position as Supreme Court Justice: