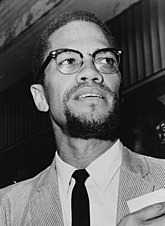 Malcolm X (born Malcolm Little, also known as el-Hajj Malik el-Shabazz) (1925–1965) was an African American who was a priest in the Nation of Islam and a leader of a black nationalist movement of the 1960s. He converted to Islam while in prison, then rose to prominence within the Nation of Islam after his release. His racial and social ideas were formed by his experiences with dire racial discrimination and economic privation during his youth, and the view of the Nation of Islam that white people were "light skinned devils." He gained infamy in the early 1960s with inflammatory denunciations of Martin Luther King and the civil rights movement, and his remark that the Kennedy assassination was "the chickens coming home to roost."

Malcolm X believed Jews had a "grip on the news media"[1][2] and suggested Jews who claimed to be friends of the black man had ulterior motives.[3] Recently, his quotes have been featured on anti-Semitic and white nationalist websites such as Jew Watch and American Renaissance.[4][5]

In late 1963, the coauthor of his autobiography was particularly worried about what he viewed as Malcolm X's anti-Semitism. Alex Haley therefore rewrote material to eliminate a number of negative statements about Jews in the manuscript, with the explicit covert goal of 'getting them past Malcolm X,' without his coauthor's knowledge or consent.

He grew disillusioned with the corruption and rigid doctrine of the Nation of Islam and left in 1964 to found Muslim Mosque, a Sunni Muslim house of worship. His experience of a diverse, multi-racial Muslim population during his Hajj (pilgrimage to Mecca) softened his views on race.[6] He founded a secular black nationalist group, the Organization of African-American Unity. The name of the organization was inspired by the Pan-Africanism of the Organization of African Unity. Its title was the first widely-disseminated use of the term "African-American" to refer to American blacks.

His notion of American blacks as a nation-within-a-nation influenced the ideology of the black power movement of the later 1960s. The popularization of his ideas, in a very general sense, was seminal in the adoption of identity politics by the American Left. The Trotskyist Socialist Workers Party (SWP) adopted his slogan of "Black Control of the Black Community" and sought to propagate his ideas. After his death, he became an icon to many who had only a vague understanding of what his ideas really were, or perhaps more importantly, where they were going.

His ideas were evolving rapidly as he sought to develop a political and economic strategy to put his ideas into practice until he was assassinated in 1965. Most importantly, he began to see cross-racial coalitions as part of that strategy. He became friendly with the SWP, who saw parallels between his ideas and the anti-colonial battles in the Third World. He spoke at the SWP's Militant Forum in New York. By Any Means Necessary (Pathfinder Press) provides a snapshot of his ideas at that time. Further reconsideration of his opposition to working across racial lines occurred in the softening of his stance against the civil rights movement. He watched the Congressional debate on the Civil Rights Act, as did Martin Luther King. He advocated for the right of black communities to armed self-defense, but not for the use of arms as a political strategy.

The contradictions of his black nationalist political and economic strategy were never resolved. The black power movement became loud, theatrical, and ineffective. Black nationalism was a divisive force, alienating mainstream blacks as well as whites. It caused fragmentation and dissension on the Left (although the SWP was still regarded as a "white" organization by black nationalists). The role Malcolm X might have had, either applying his great intelligence to those problems, evolving his ideas further, and providing true leadership; or getting caught up in the maelstrom of dead-end negativity, remains one of the great imponderables of the 1960s.