The just price is a concept that involves both economics and ethics. The idea attempts to distinguish between fair and unfair methods of gain in commerce.

It was given its classic exposition by the Catholic theologian Thomas Aquinas, though it was not original to him. It flows from the traditional Christian opposition to usury, which originally meant any and all interest on money lent.

The concept of just price in its traditional sense is largely considered obsolete. For example, the tradition of artisan's guilds deciding the prices of the goods would today be considered a cartel, an unethical and often illegal practice. That is not to mean that in certain situations too high or too low prices could not become a problem, but the issue is seen to lie in the imperfect competition, or possibly the exploitation of an insufficiently informed party, not in the deviation of prices from a specific range per se.

Aristotle, one of Aquinas's chief sources, is another source for Aquinas's ethical stance against usury. Aristotle held that there was something 'unnatural' about money begetting money, suggesting that Aristotle at least anticipated the fact that interest-based financial systems introduce a multiplier effect into the money supply, resulting in abstract sums of money in ledgers that exceed the amount of available specie. What makes usury 'unnatural' is that it automatically results in the existence of an aggregate debt larger than the amount of currency available to pay it. For Aristotle, such an economy would be inherently unstable and unsustainable. Apparently it never occurred to these folks that one is essentially renting money to someone, and that getting someone money at a time when they need it might be adding a type of value.

But, of course, Aquinas's position begins with the Bible. The fact that God condemned usury unequivocally in both the Old and New Testaments constrained Aquinas's result, of course. But to these concerns, Aquinas added an additional argument, based on the Golden Rule. The Christian should "do unto others as you would have them do unto you", meaning he should trade value for value. Aquinas was not against all profit from trade, but held instead that it was immoral to take a profit without having added value. Aquinas therefore argued that it was actively immoral, and a sort of fraud[1], for a seller to raise prices in the wake of a disaster creating a local shortage:[1][note 1] 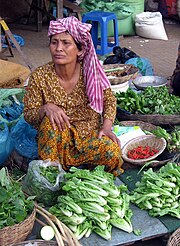 In traditional societies, prices are often limited by social conventions.

The concept of a just price tends to arise spontaneously in traditional rural and agricultural societies, and recurs with minor variations in many places. It arises in places where each person and each household is a consumer as well as a producer. Social networks create mutual understandings to promote the survival of these social units in the face of scarcity. These social ties operate to prevent the economic actors in traditional societies from behaving to maximize personal profit.

In these places, traditional understandings arise as to the relative value of various goods and services. Prices are not independently renegotiated for each transaction in an impersonal, anonymous market. Traditional staple foods and other goods deemed necessary for the survival of the community acquire customary prices; dearth or plenty should be shared by all. These traditional understandings acquire the force of custom, and with increased social complexity may eventually acquire the force of law.[2]

Even in developed industrial societies, people continue to identify staple goods deemed necessary for the continuing existence of the society, such as gasoline and electricity; and often attempt to regulate the prices of such goods to prevent them from being set entirely by the operations of supply, demand, and limited human knowledge. Upticks in the prices of these goods generate general resentment. While it makes economic sense for prices to rise significantly due to a shortage, people consider this to be foul play, and would punish businesses that do so. This is why price gouging of common products are rare.[3]

Like the traditional Christian understanding of usury, the concept of the just price has been subject to a great deal of backpedaling. The School of Salamanca

, a largely Jesuit-led enterprise in sixteenth-century Spain, sought to justify Spanish conquests in the New World and their drive to extract gold and silver from the Natives in the light of Christian doctrine. This proved difficult, though one would think it would be easy to find excuses justifications for rape, murder, and theft in the Book of Exodus.

They imagined that everyone had the right to travel everywhere for purposes of trade; since the more organized Natives sought to prevent them from going wherever they want, this made the conquest of the Americas a just war; and besides, they were just pagans. Martín de Azpilcueta

considered the influx of silver and gold from the Americas and its inflationary impact on the economies of the Habsburg empire, and concluded that gold and silver were like any other commodity, with no intrinsic worth other than what people were willing to trade for them. He is also credited with the invention of the time value of money

, which enabled him to argue that the usurer was providing a valuable service for which compensation was justly due. The moral teachings of the School of Salamanca, arguing away the impediments of traditional morality when they got in the way of money, were one of the origins of the concept of casuistry

, and were condemned by more rigid Christians such as Blaise Pascal.[4]

None of these teachings were made with the intention of entirely overthrowing the Thomist moral analysis, but they soon became the exceptions that swallowed the rule. Whether Aquinas or the Salamancans have the better part of this argument is something you must decide for yourself. On the other hand, a rhetorical tradition beginning with Joseph Schumpeter's History of Economic Analysis (1954) has tended to belittle the Thomist position and promote the Salamancans as a progressive force moving towards modernity. According to Laurence M. Vance, "[t]he mention of just price theory either invokes a blank stare, or, in the case of those familiar with the term, the dismissal of the notion as a discredited medieval religious doctrine."[5]

Aquinas's position may be untenable, or simply too radical to implement in current societies, but it is not obvious nonsense. Murray Rothbard has identified the Salamancans as precursors of the Austrian school of economics,[citation needed] which ought to tell you something.