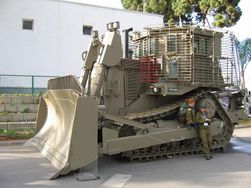 The Israel Defence Forces ( צבא הגנה לישראל), usually referred to as the IDF, was founded on May 26, 1948 following the establishment of the state of Israel on May 14, 1948. Its objective is "to protect the inhabitants of Israel and to combat all forms of terrorism which threaten daily life".[citation needed]

The IDF is made up primarily of youths between the ages of 18 and 25, as conscription is mandatory following graduation from high school for both men and women, unless physically or mentally unfit for service. A major exception to this are youths from very religious families, who are allowed to continue their studies in a Yeshiva so that they can pray for the safety of Israel, and Arab youths, since forcing them to fight other Arabs would be a recipe for disaster (although they may join voluntarily and a number of them do, most of them Bedouin). Also exempt from conscription are women who are married, pregnant or mothers, or are from religious families who don't think women should be fighting.

They have really cool up-armored Caterpillar D9 bulldozers, which they use to demolish buildings that are harboring terrorists, as well as the homes of families of suicide bombers, the homes of those Palestinians who happen to live in the same building as or adjacent to such targets, or for "military/security needs" (e.g. living in Gaza).[1] However the IDF has also used military force to evict Jewish settlers from the Sinai peninsula in the 1980s and from Gaza in 2005, when their presence there became contrary to the political will of the Israeli government. As a whole the IDF is a rather efficient fighting force that has never outright lost a war (losing a war may very well result in the end of the existence of the state of Israel) but has from time to time struggled, especially on the "PR-front".

The IDF have repeatedly been criticized by international groups, such as Amnesty International[2], for regularly ignoring basic human rights. Below, for example, is a small selection of recent reports from Human Rights Watch outlining questionable actions on the part of the IDF. The IDF's response to these concerns is largely along the lines of "everyone around us wants us dead, so fuck off."

Apologists, even of the pseudo-liberal variety, often argue that killings by the IDF are inadvertent, accidental, unintended, lacked willful intent, or were in legitimate self-defense. Even a skeptical cursory view of the findings of human rights organizations paint a very different picture offered by such apologists. Consider the Second Intifada where violence among Palestinians was more prevalent and heavily cited as reasons for enhanced security.

This military-related article is a stub.
You can help RationalWiki by expanding it.
Retrieved from "https://rationalwiki.org/w/index.php?title=Israel_Defence_Force&oldid=2477960"
Categories:
Hidden categories: