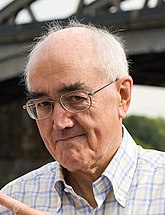 James Burke (1936–) is a British author, historian and television host. He is most famous for his book and corresponding television series Connections

, as well as later followup series The Day the Universe Changed

, which ran from 1965 to 2003. He was the principal anchor of the BBC television coverage of the Apollo Moon missions

— an extremely demanding job because of the need to present live studio material, unscripted, for long periods.

Burke's expertise on the topic of spaceflight was also used as he presented and co-wrote three major documentaries: The End of the Beginning, The Men Who Walked on the Moon,[1] and The Other Side of the Moon.[2]

In his work Connections, Burke breaks down the history of certain world-changing inventions (such as the assembly line, airplanes and the atomic bomb), some with their roots starting as early as antiquity. While he focuses his analysis on mostly modern inventions, he first acknowledges the importance of the plough as the invention that ultimately allowed civilization, and therefore all of the other inventions he analyzes, to come to pass.

The bulk of his work in the Connections series follow the line of "this happened, which inspired this to happen." He does not differentiate the importance of one event over another: a discovery by one individual hold as much importance as a discovery by another individual, whether they knew about each other's works or not. The innovations did not all come from scientific inquiry — some occurred as a result of plagues, wars, tragedies, weather phenomena, political movements, religious movements, marriages, deaths, births, assassinations, and voyages and adventures to uncharted parts of the world.

However, he additionally argues that such achievements are not linear. Tracking his analyses would ultimately form a collection of directed acyclic graphs,[note 1] some of which overlap between innovations as one (e.g., the invention of the light bulb, or the Crusades) would be responsible for inspiring multiple other innovations.

Quite reasonably, at no point does he ever argue that "If this hadn't happened, then this wouldn't have happened."[note 2] Instead, he challenges the reader or viewer to look for connections in everyday life, and to look for possibilities in that which have not been created, discovered, challenged or attempted before, for who knows what those things will inspire.

While some inspirations for certain innovations could have seemed random (such as weather or plagues), it is only in the sense that they were (most likely) not as a result of human interaction or interference with the world.[note 3] Each of the innovations were adaptations in response to changes in the world. For example, the chimney, as Burke explains, was an innovation in response to a long period of cold weather, which then allowed humans to survive and thrive in progressively colder climates, thus expanding human settlements farther north into Scandinavia and Siberia. In this sense, human innovation evolves at a technological level, but is certainly not random.

His initial work Connections takes on a serious, mid-1970s Cold war-era demeanor, particularly in the second chapter (and corresponding second TV episode) when he focuses on nuclear weapons. He does interject some modest British humour in his work, particularly when the events of inspiration involve sex or infidelity among royalty. His later works, done in the 1990s, reflect a more wistful, post-Soviet era, taking on innovations that are a little less world-changing but no less important in daily life, such as fingerprinting, GPS and ballpoint pens.