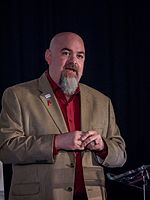 Matt Dillahunty (born March 31, 1969) is the current host of the webcast and cable access television show "The Atheist Experience", and from 2006 to 2013 served as the president of the Atheist Community of Austin. He was also a founder of the comprehensive counter-apologetics Wiki "Iron Chariots", which went offline in 2018. [1]

Dillahunty is an outspoken atheist and fierce advocate of the concept of separation of church and state. Having been raised as a fundamentalist Baptist and having studied with the intent of going to seminary and becoming a minister before his bout of apostasy, Dillahunty is familiar with the worldview of Christian fundamentalists, and very knowledgeable about both the history and the text of the Bible.

He frequently participates in atheist and skeptic conferences around the world, and alongside fellow activists Seth Andrews and AronRa, he traveled to Australia in March 2015 as a member of the "Unholy Trinity Tour"[2].

Dillahunty is a huge fan of debates (of all types) and finds them very useful for collecting valuable information. He has debated numerous theists, including Ray Comfort on his live show The Atheist Experience[4].

When debating, Dillahunty is also willing to admit that he does not know when asked a question that he cannot answer[5]. He rejects the notion that saying "I don't know" in a live debate is tantamount to waving the white flag (like the ones seen in the old Tom and Jerry cartoons) in admitting defeat.

While he is not formally educated in any scientific field, he has amassed enough of a working knowledge of biology, cosmology, and geology to defend these fields from creationists, including Ray Comfort. Dillahunty does not claim to have any expertise in any of these fields and will frequently admit that his knowledge is limited, even as he soundly schools creationists who declare their own willful ignorance of science.

While Dillahunty firmly believes that creationists claims about science should be combated, he is not a huge fan of when actual scientists debate creationists, as it may falsely elevate the creationist position. Rather, he believes that science enthusiasts, like AronRa, should debate them instead (in part so that the scientists can get back to work in the lab instead of wasting their time having poo flung at them in a debate).

In 2018, invited by Pangburn Philosophy, Dillahunty debated Jordan Peterson[6], who might not be a creationist but is a christian believer with plenty of stupid beliefs. After a brief introduction, Dillahunty sat down with Peterson. While firstly (and annoyingly) congratulating Peterson on being a nuisance to the "Social Justice Warriors", Peterson couldn't help himself but make wacky statements that Dillahunty had to engage. Among them (but not only):

In April, 2021 he criticized Richard Dawkins's transphobic comments,and ridiculed Sam Harris for not subsequently showing solidarity with the AHA after they revoked Dawkin's 1996 humanist of the year award.

Dillahunty rejects the notion that God definitely doesn't exist, taking the more mainstream atheist approach that one does not need to believe in a god. He even ended up getting into a minor debate with a caller on The Atheist Experience in 2019, who claimed to prove that no gods exist[11]. Dillahunty criticized the fellow caller for shifting the Burden of proof to the atheist, something he firmly believes should remain with the theist. He has made similar comments on the existence of an afterlife[12].

Dillahunty's position has led some to claim that he is actually agnostic, not an atheist. He cleared up his views on atheism vs agnosticism on his YouTube channel in 2016[13].

This atheism-related article is a stub.
You can help RationalWiki by expanding it.
Retrieved from "https://rationalwiki.org/w/index.php?title=Matt_Dillahunty&oldid=2404247"
Categories:
Hidden categories: