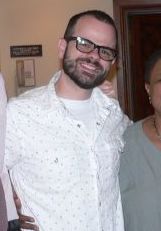 Jamie Charles "Jay" Bakker (born December 18, 1975) is an American pastor, author, speaker and theologian. He may not look like your typical pastor by first glance alone due to his piercings and tattoos, but looks can be deceiving. He is the son of disgraced televangelist Jim Bakker and Tammy Faye Messner. Growing up, he became disillusioned with and critical of the views and attitudes of Christian fundamentalism and the Religious Right. Inspired by his mother's contributions to the LGBT rights movement as well as the teachings and philosophies of Martin Luther King, Jr., Brennan Manning, Paul Tillich, and Peter Rollins, he adopted a more progressive and inclusive version of Christianity and is the co-founder of Revolution Church.

Jay Bakker preaches, as he described to Larry King, a form of Christianity that is "more liberal than most".[1] He embraces people from all walks of life, even those with alternative lifestyles and encourages doubt and uncertainty in certain areas of the faith. He has questioned and challenged traditional Christian concepts such as atonement and salvation. He has also endorsed gay marriage and has been an advocate for the church's acceptance of the LGBT Community.[2] In response to the legalization of gay marriage in Minnesota, his church used rainbow-colored communion bread to celebrate. [3]

This christianity-related article is a stub.
You can help RationalWiki by expanding it.
Retrieved from "https://rationalwiki.org/w/index.php?title=Jay_Bakker&oldid=2448655"
Categories:
Hidden categories: