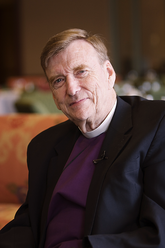 John Shelby Spong (1931–2021) was an American former Episcopalian bishop and liberal Christian author whose writings call for a new interpretation of Christianity relevant for the 21st century.

Perhaps his most critical (and critiqued) book is A New Christianity for a New World : Why Traditional Faith Is Dying and How a New Faith Is Being Born. In it, he outlines twelve points of reform that make him seem downright rational:

Of course, his biggest critics are theologians and apologists. While he never goes so far so as to reject God or the teachings of Jesus altogether, many atheists find him tolerable as his views eschew any notions of condemnation, damnation or Biblical literalism. Richard Dawkins even credits Spong with this observation in The God Delusion: