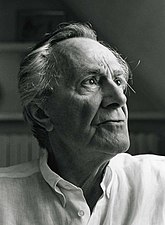 Jean-François Lyotard (1924–1998) was a French sociologist and post-modernist. Born in Vincennes, France, he was an aspiring young boy looking to get into many different modes of employment such as novelist or even Dominican monk. Throughout his studies in philosophy and literature, he would meet Giles Deleuze

who would continue to encourage his post-structural and postmodernist thought. Heavily political, he would continue to acquire his Masters degree and join a socialist group in the wake of World War II. However, after interrelational turmoil within the group, it splintered and he moved away from socialism and Marxist thought in general. During the 1970s, he would write his most prominent work, The Postmodern Condition.

This is the work that he is most famous for in sociological circles, and would continue to bring postmodernism into the mainstream political structure.[1]

Postmodernism is the sociological school of thought largely concerned with the nature of manufactured and administered areas of social life that have dominated reality and replaced it with something pretending to be reality, but is not actually. It is generally indicative by thoughts related to the nature of epistemology, and how social life is shaped by the dominant forces that present an image, flavor, or even sound that seems real but in its fundamental sense is not actually real. A speaker is a technological oddity that is able to replicate a sound with exact detail, yet is itself not the instrument that makes the noise. However, the technology is developed for the sole reason of producing said music as if it were 'real' instruments playing, despite it obviously being a piece of technology and not that actual instrument or virtuosos.

Lyotard's work was largely concerned with the nature of technology, and specifically computers, and their role in the construction of society around us. Specifically, the nature of knowledge being given via a technological medium, not to provide a meta-narrative for the entire scope of reality, but instead a specific presentation of reality that is compatible with the institutions and system that exists. Truth is being redefined in such a way to reflect certain needs and desires of a group, rather than being an objectively determinable subject of substance that can be agreed upon. In a sense, his specific strain of thought is derived from the difference in perspective based on the technological access and journey of a specific person: due to the immensity of the internet, it can seem like you have discovered your own 'world' that fits with your worldview, but this is in fact one of many possible realities to interpret that is wholly not concerned with reality at all. It specifically lends truth to the phrase, "each person lives in their own reality".[2]

Lyotard, in discussing the nature of technology, regards the economic drive and output of things related to technology and computers as a majorly important topic. He distinctly discusses the nature of how knowledge itself is being commodified to the point of being sought after for the sake of knowledge. Possibly invoking images of various knowledge-based types of internet-al content, clickbait articles such as "top 9 pop stars YOU WON'T BELIEVE DON'T PAY TAXES" are constructed, distributed, and sold to a consumer who consumes the info. They do not consume the info for its use-value, as its clear that the use is banal and drivel, if at all. Rather, the pursuit of knowledge is in it of itself shaped as desirable no matter what that knowledge even is. In particular, the knowledge that is consumed is of a certain nature, designed to be peddling to specific demographics who will be receptive to that particular knowledge being distributed.

He extends a critique, like other types of critical philosophers and sociologists, on the nature of scientific thought in our society. While scientific thought has developed many groundbreaking discoveries, it is being commodified and diluted to the point where 'science' is being done for the sake of doing it, not because any meaningful questions are being asked. No one really cares about scientific studies about what products people want in a vacuum, but they still seek them out as points of interest anyway. The narrative is lost in the endless search for knowledge, drivel being sold as something with substance. Science itself is being reified to a point where it represents a hollow shell of itself. It doesn't serve the purpose that it should, and is instead used for the glorified use of habit, demoralizing researchers and scientists due to the banal nature of this continued nondiscovery.

Essentially, Lyotard breaks down that there should be two types of reason (similar to that of critical theorists), one of which is based in positivism and one of which is based on critical and reflexive thought. People who blindly examine scientific 'facts' without analyzing the narrative at which those facts are 'true' are simply accepting a form of reality that is entirely baseless. He examines the role of 'language games' and how they are used to shape the narrative around people, and how they are necessary in interaction. While the rules for a language game are few, flexible, and far in between, they are nevertheless existing and can be used to promote or detract a narrative using any rhetorical means possible. With a combination of linguistic creativity and positivist thought, we would be able to move past the simulated virtual realities of computers and the version of reality that is presented within them.[3]