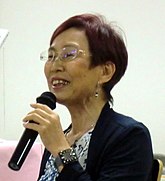 Ueno Chizuko (上野 千鶴子) (1948–) is a Japanese sociologist. One of the few prominent feminist figures in Japan. She has achieved some mainstreaming of gender studies, which was a non-mainstream study at Japanese universities.

She calls herself a radical feminist and a Marxist-feminist.

Ueno is basically a leftist and socialist. Ueno strongly opposes historical revisionism, which has been led by Japan's right-wing nationalists since the 1990s.

Even though she is Japanese, she made statements about "comfort women" used by the Japanese Army during World War II. Her position is that the Japanese government should apologize and compensate the comfort women as much as possible.[1] That's why right-wing to far-right and nationalists in Japan hate Ueno Chizuko very much.

She takes a somewhat unique view of sexism historically. She believes that modern sexism is more serious than the premodern sexism, and has argued that modern gender discrimination is not due to tradition but an acute product of post-industrial economic structure. She is opposed to racism, nationalism and discrimination against sexual minorities.

She takes a very negative view of prostitution. She seems to think that prostitution is a product of capitalist greed.

This article is a stub.
You can help RationalWiki by expanding it.
Retrieved from "https://rationalwiki.org/w/index.php?title=Ueno_Chizuko&oldid=2151909"
Categories:
Hidden category: