From RationalWiki
(Redirected from Jersey devil)
Jump to: navigation, search 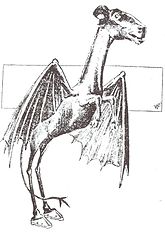 It waits for its prey to fall down laughing before it strikes.

The Jersey Devil is a legendary creature of folklore rumored to live in the New Jersey Pine Barrens. Cryptozoologists take the legends at face value and think it's an unknown animal that somehow has evaded capture for hundreds of years. The local professional hockey team

is named for it.

Supposedly, the appearance of the beast varies depends on the eyewitness. Most accounts describe the devil as having the head of a dog, the face of a horse, bat wings, a tail, and (of course) hooves.

According to folklore, the creature was born in 1735 at Estelville, New Jersey as the child of a Mrs. Leeds. She had cursed the unborn baby out of frustration (it was her thirteenth child) and declared that it would be born a devil. She apparently got her wish and soon after its birth, it transformed into a devil and fled into the Pine Barrens. Other accounts vary when it comes to the family the creature was born into or the location of its birth.

Another theory relates it to a feud between scientist, politician and publisher Benjamin Franklin and the rival publishing firm of the Leeds family, who had a dragon on their family crest which looks a bit like some images of the Jersey Devil. Hero of the Enlightenment Benjamin Franklin may have claimed his rivals were in league with the devil and made up other stories about them cavorting with monsters to discredit their business, according to historian Brian Regal.[1]

There are other various myths associated with the Jersey Devil. In one a clergyman was able to exorcise the devil from the Pine Barrens in 1740, but it returned 150 years later (apparently exorcisms have expiration dates). Two famous accounts state that the devil was seen by Commodore Stephen Decatur

The Devil's most famous appearance was a rash of sightings in January 1909 across New Jersey and eastern Pennsylvania. Several hoaxers took advantage of the hysteria by presenting a "captive" Jersey Devil which turned out to be a kangaroo with wings glued to its back. One of them, Norman Jeffries, even planted fake reports of the Devil in local newspapers.

Some people have stated that the creature is a bird, a pterodactyl[note 1] or a supernatural harbinger of disaster.[2]

There were two sightings in 2015. One was photographed by Dave Black from Little Egg Harbour, and was described by Vice as looking like "a stuffed animal hanging from a tree". For the record, the person who "broke" the story was NJ.com’s (ahem) lifestyle-and-paranormal-activity reporter Kelly Roncace, who, when not playing ghost buster with an organization called "Jersey Unique Minds Paranormal Society", supposedly has high journalistic standards.[3]

Another local, Emily Martin, took a video of a bat/goat thing apparently flying through the night sky.[1] It looks a bit fakey to say the least,[4] as Snopes.com observed: