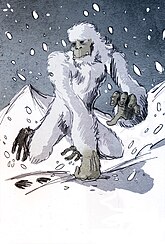 Yeti, sometimes called the Abominable Snowman, is a bipedal ape-like cryptid said to inhabit the Himalayas. It is in a class of semi-fictitious beasts we share our planet with, one of several that are ape-like and usually very large compared to humans. The Yeti is typical of the Himalayan region. Its brown-furred relatives are usually found in remote, inaccessible areas on most of the other continents. Some people claim that the Yeti is a descendant of Gigantopithecus. The fact that Gigantopithecus probably did live in the Himalayas doesn't prove that the Yeti exists, only that there is a place for it in the evolutionary tree if substantial evidence of its existence is found.

Some have proposed that, in the distant past, someone in the region happened upon a largely intact Gigantopithecus skeleton. Not understanding fossilization, they mistook it for the corpse of an extant species and the legend grew from there.

Other such creatures would include the Loch Ness Monster Nessiteras rhombopterix, sasskwach saskvach (oh to hell with it), and the Great Gay Conspiracy Agenda.

Unlike aliens, they are indigenous to this planet (if they exist).

SubGenius mythology maintains that the SubGenii (or "Yetinsyn") are a cross between humans and Yeti.

Those who know better realize that the yeti is just a goat, bear, or yak.[1]

Stories of these elusive snow monsters are found in the folklore of various Himalayan people. Amongst westerners, sightings, alleged artifacts, and attempts to find and/or capture the Yeti have been popular since at least the 19th century. In addition to general pop-cultural interest, papers such as the Daily Mail have launched expeditions to find the creatures,[2] and several mountaineers and explorers have taken photos of footprints allegedly belonging to the Yeti.

However compelling one might find hair samples, footprints, and the like, new studies show that there is a more reasonable explanation than assuming the existence of a yet-undiscovered cryptid. The footprints, for example, most likely belong to a local species of "tree bear" with a semi-opposable inner digit evolved to grip tree branches.[3]

This biology-related article is a stub.
You can help RationalWiki by expanding it.
Retrieved from "https://rationalwiki.org/w/index.php?title=Yeti&oldid=2403131"
Categories:
Hidden categories: