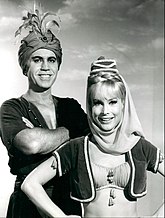 Jinn, in their native costume.

The stereotypical Jinn lamp. Don't polish it too much, or you'll go blind.

A jinn (same plural; alternative transliterations are djinn and genie) is a supernatural being in traditional Arab and/or Islamic folklore. Like many other fairies, they have been demonized by an Abrahamic religion, although this time by Islam rather than by Christianity. According to Islamic theology, Allah created jinn from "smokeless fire", and like humans, they possess free will — some jinn are good, others are evil. The ifrit are a type of jinn and a medieval Iranian slur for black Africans.

According to one tradition, Iblis (the Islamic version of Satan) is a jinn. (The other version makes him a renegade angel.) Iblis and his crew are usually called shaytan, "devils", with the capital-S "Shaytan" reserved for Iblis himself, just like Satan is "the Devil" in Christianity.

There is also a strong inconsistency between Muslim folks and Muslim shaikhs regarding the nature of jinn: In Folk-Islam, Muslims beleive jinn to be part of the very world humans live in. They might get offended or bothered by humans, can interact physically with the enviroment and many Muslims believe to have seen a jinn or know someone who saw them. On the otherhand, scholars tend to reject the possibility to see a jinn. Also they are rather thought to live in a parallel dimension with no other power than tempting humans. In Folk-Islam, Muslims use several different charms to protect themselves from such unseen beings. However, this is considered as polytheism by most shaikhs.

Belief in jinn still persists among some superstitious and/or fundamentalist Muslims in the same way belief in demons persists among some superstitious and/or fundamentalist Christians. Exorcisms are attempted on individuals displaying mental or physical illness to get rid of the jinn possessing them. As with the Christian version, this can lead to severe abuse against the people believed to be possessed. For example, in July 2010 emerged reports about a man in Saudi Arabia who had kept his "jinn-possessed" son in chains for six years.[1] In 2009, in Birmingham, a 21-year old Pakistani immigrant woman was smothered by her husband and some of his relatives in an attempt to drive out a jinn possessing her.[2]

Arguments for the existence of jinn[edit]

The wrong kind of jinn, but it still can take you to faraway lands…

Some medieval scholars among Islamic society thought that jinn do not really exist. They offered psychological explanations for alleged sightings of jinn. Critics of the belief in jinn gave various reasons why the ideas about jinn are contradictory:

On the other hand, scholars who favored the existence of jinn had more "convincing" arguments:

Finally, the denial of jinn became prohibited by some scholars. Furthermore, those who denied the existence of jinn were allowed to be killed according to them.[3]

The One Thousand and One Nights version[edit] 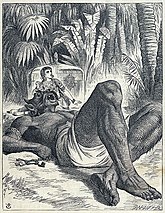 The sleeping genie and the lady, illustration by John Tenniel in One Thousand and One Nights

Jinn are known for shapeshifting into different animals and sizes, being invisible, and granting wishes, usually coming in sets of three. Makes you wonder why Allah didn't give humans any cool superpowers.

King Solomon was believed to have captured jinn in bottles. He would throw them into the sea and people would release them and get three wishes. However, they would usually trick the jinn to go back into the bottle, which seems like a shitty way to treat someone who's just granted you wishes.

Genies are very popular and have been featured in several films, books, and television shows. They are usually sadistic or goofy (or both). According to Western narrative tropes, jinn spend their time locked in lamps or bottles and grant at most three wishes to the one who frees them (and sometimes behave like sadistic fans of LessWrong).

Ironically, the jinn known from The Nights, are rather Div, as Persian culture had a strong impact on Islamic orthodoxy over a 1000 years, something contemporary scholars would never admit to have happened.