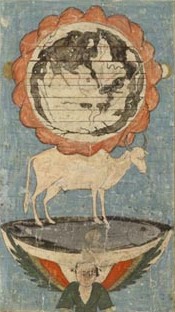 Unlike the young Earth creationist movements within Christianity, few, if any, Muslim creationists insist that the world was created in a matter of days a few thousand years ago[citation needed] as most accept the Koran as a metaphorical and contemplative document[citation needed]. Translations of six "days" are also far more ambiguous than their explicitly Christian counterpart.[1] However, they do reject evolution, and especially the notion that humans evolved from animals. They accept that the Earth and Universe are old.

Largely because the Qur'an is less explicit about the subject, Islamic creationists are primarily Old Earth creationists. However, many reject evolution, and the vast majority reject common descent.

Some Islamic fundamentalists however take things a step further and promote that the earth is flat, using a literal interpretation of several Koranic verses.[2][3]

.[4][5][6] The idea of Qur'anic scientific foreknowledge is a relatively recent invention,[8] linked to rising Muslim creationism and fundamentalism.[5][7][note 1]

, a French physician, promoted Qur'anic scientific foreknowledge in The Bible, The Qur'an and Science

and other writings. Considering that Bucaille was living in Saudi Arabia at the time, was an employee of the Saudi royalty, and may have been paid to write said book by said royalty, it appears entirely plausible that Bucaille was a government shill for not fully critical of Qur'anic scientific foreknowledge claims.[8] Dr. Muhammad Rasjidi, translator of the book into Indonesian and former Indonesian Minister for Religious Affairs, describes Bucaille's book as "a half-baked mish-mash of pseudoscience and pseudo-exegesis".[9] Despite this, Bucaille helped propagate Qur'anic scientific foreknowledge to regions that hadn't previously been exposed to the idea.

Harun Yahya is perhaps the most prolific[10][11] and least credentialed[12] propagator of Qur'anic scientific foreknowledge, with hundreds of websites, books, articles, and lawsuits[7] on the subject. Within Islam, he is perhaps the most notorious proponent of creationism, and has been heavily influenced by American Christian creationism. In recent years, he has become one of the more vocal creationists and some of his publicity stunts and ramblings would make even Ted Haggard blush. He has repeatedly been shown to not know what he is talking about, such as with his Ask Darwinists question sheet (which even an amateur could answer easily) and mistaking a fishing lure for a live animal in one of his books. In line with Gish Gallop tactics, Yahya is probably there just to waste people's time and try to keep the "controversy" in the public eye in order to bilk more money out of the faithful, rather than make any real contribution.