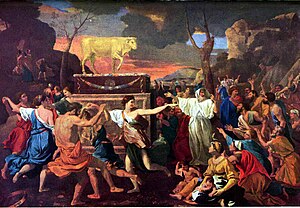 The Elevated Places is the seventh sura of the Qur'an. It's got quite a bit about the whole Eden stuff, sort of like Genesis, only angrier. Notably, in this version, the forbidden fruit is claimed to grant immortality. There's also a load of ranting about Hell: "And the dwellers of the Fire cry out unto the dwellers of the Garden: Pour on us some water or some wherewith Allah hath provided you", it says. "They say: Lo! Allah hath forbidden both to disbelievers".

Homosexuality is denounced: "And Lot! (Remember) when he said unto his folk: Will ye commit abomination such as no creature ever did before you? Lo! ye come with lust unto men instead of women. Nay, but ye are wanton folk." Allah then boasts about how he "rained a rain upon them". Indeed, a large part of The Heights is taken up by God mouthing off about the people he's killed.

One of the more memorable parts is an account of the whole golden calf scene from Exodus - with the notable addition that the calf "gave a lowing sound". Moooooo!

This Islam-related article is a stub.
You can help RationalWiki by expanding it.