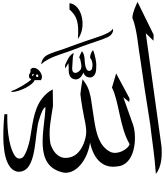 Allah (الله) is the Arabic word for God. The word Allah derives from two root words: Al meaning "the" and ilah meaning "God" (the same God as El in Canaanite religions).

A common misconception is that "Allah" is the name of a deity worshiped exclusively by Muslims. In fact, Muslims hold that Allah is the God of Abraham, the same God worshipped by Jews, Bahai and Christians, whom they claim created the universe and will be the judge of man on the Day of Judgement. Indeed, Arabic-speaking Jews and Christians refer to God as "Allah" and use the word "Allah" in their holy texts. As further proof, there's an Islamic tradition that the longer version of "Allah" is "Allahummah," which is an obvious cognate with the Hebrew "Elohim" used in the Hebrew Bible.

In point of fact, a vast number of gods have been invented by humanity over time, sometimes the differences between the gods are great and sometimes less so. Consequently arguing - for instance - about whether or not the Ares the Greek god of war is the "same" as Mars the Roman god of war is really a debate for their respective believers.

Unlike the Christians and Jews who generally refer to God as male, Allah is neither male nor female. In fact, it is a specific blasphemy to call Allah "male" or "female." Allah is at one time both and neither. Because of the nature of Arabic, when a pronoun for Allah is used, it must be the male pronoun, huwa, but this is based on the gender of the word, and not the fact that it is a "male" thing.[note 1]

Allah is also likely the name of an earlier deity (probably the creator god) from the polytheistic pre-Islamic religions in or around Mecca. Many scholars hold to a theory that both YHWH of the Israelite (proto-Judaism) religion and Allah of the Meccan religion changed over time, eventually becoming the monotheistic god.

Some people, like Jack Chick, think that Allah was a moon god named Hubal because the symbol for Islam has a moon. However, this is discarded because the Quran says that Allah created the moon:

Despite the word "Allah" meaning "God" in both the Arabic and Malay[1] languages, it was banned for use by non-Muslims.[2] The ban was initially thought to only apply to peninsular Malaysia, but has been extended to all of Malaysia.[3] The sizable Christian population in Malaysia had long-used "Allah" in their Bibles and other communications to mean "God" (though occasionally the word Tuan is used, which would be closer in meaning to "Lord"). In 2014, a Malaysian radio station, BFM, was fined for broadcasting an interview in 2013 with Iranian-American Muslim scholar Reza Aslan, in which he said that Malaysia was a worldwide laughingstock because of the ban.[4]