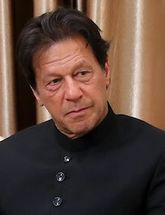 Imran Khan (5 October 1952–) was a professional cricket player before entering politics. He served as the 22nd Prime Minister of Pakistan (18 August 2018 through 10 April 2022) and Leader of Pakistan Tehreek-e-Insaf (PTI), a political party that he created.

His ascendancy to premiership set a record for 3rd consecutive civilian administration in the short history of Pakistan, which has been dominated by military rule.

Even though he might seem like a fresh face in Pakistani politics, his administration was filled with traditional establishment leaders. On April 10, 2022, Khan lost a confidence vote and was forced to step down.[2]

Here are some old figures that Khan used to speak against when they were in other parties, now that they have joined PTI, their misbehaviors are now the opposition's propaganda.[6]

All of these have worked for either Pervez Musharraf, Asif Zardari, or Nawaz Sharif, basically these lackeys remain in power no matter who's at the top.[8]

Some of them are outright ex-military officials or their family members, which screams establishment.

Khan has repeatedly called out the Indian government for their actions against Muslims in Kashmir. While this is true and should be called out, Khan does not feel the same way for Uighur Muslims in Chinese concentration camps.[11]

Kashmir is repeatedly used by subsequent governments in Pakistan to deflect from actual domestic issues.

Khan with Muhammad Bin Salman in 2019

Saudi Arabia has always had close relationship with Pakistan. In a visit from Saudi Prince Mohammad bin Salman, Khan personally gave him a ride. This visit resulted in a $10 billion investments for a refinery and petrochemicals complex in Gwadar.[12]

After Khan's foreign minister gave a flaring speech against Riyadh's non-action regarding the Kashmir dispute, Saudi Arabia pulled its support.[13] Pakistan then decided to send it's leader (The Chief of Army Staff) to Saudi Arabia.[14] 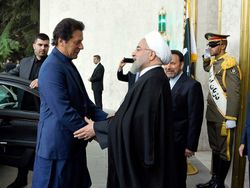 Khan has been vocal against US sanctions on Iran since the early days of his campaign. [15][16]

He also wants to play the role of mediator between Saudi Arabia and Iran.[17]

In his victory speech, Khan praised China and said he would seek to further strengthen their relations, he also highlighted the importance of the CPEC (China–Pakistan Economic Corridor) projects.[19]

He formally met with President Xi Jinping in October of 2019.[20] 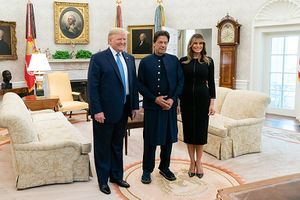 At the White House

The United States and Pakistan have had rocky relation in the past. Imran Khan has also shown his views against foreign aid.[21]

Khan met with President Trump on 21 July 2019 in the White House. The leaders decided to "reset" their relationship with each others. Trump brought up the role of Pakistan in the Afghanistan War, and a possible peace process.

Khan in June 2020, suggested that Osama Bin Laden was a martyr.[22] One of his cabinet lackeys said that this was a "slip of tongue".[23]

In March 2022, Khan accused the United States of colluding with Pakistani MPs and the military to oust him from office, citing his past criticisms of US foreign policy as their motivations.[24] The US denied the claims.

After winning the election in 2018, the speech that Khan gave, involved improving relations with India and to establish good trade agreements.[25]

From 14 February 2019 to 22 March 2019 a number of border skirmishes occurred between the two countries. This all started when 40 security personnel died on Indian side by suicide car bombing plotted by the Pakistan-based Islamic militant group known as Jaish-e-Mohammad.

[26] On 22 March Pakistan and India jointly accepted a peace agreement.[27]

In November 2019, one great policy step taken by Khan's government was to open visa-free border crossing for the Sikh community, this is known as the Kartarpur Corridor.

Pakistan is not only opening the border but also their hearts for the Sikh community.[30] 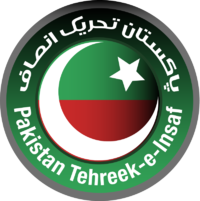 The PTI (Pakistan Movement for Justice) was founded in 1996 by Imran Khan, who had recently retired from international cricket. Since inception, the slogan has been of forming a "New Pakistan".

The party's ideology can be defined as economic reform and Social conservatism. It was started on the grounds of being anti-status quo and on the promise of an Islamic welfare state. 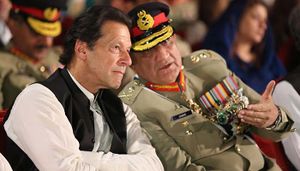 Imran Khan came into power after a long struggle, but this victory came at the cost of embracing certain establishment figures. Also, other popular figures like Nawaz Sharif of PML(N) were conveniently excluded by the supreme court.[32]

Khan's wife Bushra Imran wore a burqa in public during his term, leading to mixed opinions. [33]

The Government has done a complete 180° turn on numerous campaign promises. These are known as U-turns in Pakistani media.