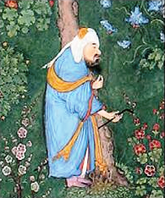 Painting of Iblis in The Shahnama of Shah Tahmasp (c. 1522 CE)

Iblis is the Quranic counterpart of the Christian devil.

Originally, the story of Iblis was taken from Jewish lore as a fire-created angel, who refused to prostrate himself before mankind. However later Muslim exegetes felt upset, that angels are not merely trustful beings, so they decided to count him as a jinn, despite many earlier reports telling otherwise. Some exegetes even altered the Quran to suit the idea of impeccable angels,[1] afterwards claiming their own version always existed. Therefore, the works of many scholars, such as Tabari, who defended Iblis' angelic nature, have been censored.[2] Muslims following an allegedly original version of Islam believe, contrary to the earlier reports, that Iblis is a jinn.[3][4]

In one version, spread through authentic sources for Islam, such as Youtube, Iblis was created by the Big Man himself more than 25,000 years ago by the hot wind of the desert, along with his jinn brethren.[5] As simple as his creation may seem, Iblis' story on the other hand is a bit confusing. He helped out God like all the other jinns until 25,000 years ago, when his buddies went rogue and disobeyed the Almighty, who then unleashed the wrath of the angels on them. Iblis, however, "was recognized from amongst the jinn by God as 'a worthy pupil'" and got to hang with the angels.[5] In this version, the jinn "to whom Iblis obviously belongs" are "clearly distinct" from the angels by their creation from fire instead of light (note: fire and light have been regarded as the same thing within the Islamic literature, therefore most scholars haven't seen any trouble depicting Iblis as an angel).[6]. So when Iblis defended himself later onwards, that the Big Man only adressed the angels, by stating he was created from fire, he was punished for questioning the perfection of the Big Man's judgment (yes he is even more perfect than the angels). Following this strant of Iblis' backstory, he was elavated to the rank of angels, due to his worship over 2000 years. However, when he argued, he is better than Adam, 'cause of his hard work, he was punished nevertheless.

In another version, based on the reports of the earliest Muslims, but usually regarded as unauthentic by Muslims (since Youtube is much better than well published books, a talk to fellow Muslims in actual Muslim countries, or reading the Islamic sources themselves) Iblis was not a jinn, but an angel, who led the angels into battle. When God created humans, God decided to appoint him as a Satan. So God checkmated Iblis by giving him a contradictional orders: First he should never prostrate himself before other than God, but at the same time, insisting he must prostrate himself before the first human.[7]

Both versions end up in the story of the Quran: All the angels were commanded by God to bow down before Adam, but Iblis refused, reckoning that being made from fire made him higher up the food chain than Adam, who was made from mud.[8] Refusing God is a big no-no, and Iblis subsequently got his ass kicked out of heaven for it.[8]

As punishment, God condemned the poor bastard to the fiery pits of Hell, but, in one of his typical, pointless, makes-you-wonder-what-goes-through-the-guy's-mind kind of moves, God postponed it until Judgement Day so Iblis could go about tempting people and causing all sorts of mischief.[8]

who he almost convinced not to "[perform] the ritual washing of the Prophet's dead body."[8] Although other devils, such as the Christian Satan, have been often blamed for bad things since their conception, there is no real widespread and established story about a devil being the cause of some terrible thing that happened after the stories of their respective holy books.[note 1]

In the end, though, it's really the same old, same old. Those who don't know their place, those who refuse to bow down to the religious hierarchy, are, de facto, the epitome of evil.[note 2]

This islam-related article is a stub.
You can help RationalWiki by expanding it.
Retrieved from "https://rationalwiki.org/w/index.php?title=Iblis&oldid=2287586"
Category:
Hidden category: