Christianity is not a religion

The odd-sounding claim that "Christianity is not a religion",[note 1] or its full version, that "Christianity is not a religion, but a relationship with God", is made by some Christians, most typically by members of the evangelical Protestant brands. Advocates usually make the claim as a form of semantic special pleading to claim a unique status for Christianity among the world's religions or in an attempt to recruit seekers disillusioned with their previous religion.

Some supporters of this position, including Bill O'Reilly, take this line of argument so far as to claim that since Christianity is not actually a religion, there is no U.S.-constitutional or moral obstacle to establishing it by law or having it promoted by government.[1][2]

The people making this claim never follow through as far as wanting to remove religious tax exemption for Christian churches.

The first recorded use of this expression is, curiously enough, in 1958.[3]

Argument from grace of God[edit]

This claim is that other religions teach that you must justify and sanctify yourself, earning the favor of the deities by practicing religious rituals and observing religious law, but that Christianity is not supposed to be like that. Instead, Christianity is founded on the unearned and unearnable grace of God which He bestows on believers by his own initiative and which enables them to become Christians.[4] Nothing an unsaved person can do can earn God's favor or oblige God to save your soul; humans' moral inability to save themselves is what Calvinists call "total depravity". Only through faith can Christian salvation be claimed, and faith is not humans choosing to make themselves holy, no more than you can choose to believe or disbelieve; if you have the faith that brings salvation, it's because God has chosen to allow you to have it. It's only after the Christian has been saved that he becomes obliged to practice his faith by observing rituals and following a code of rules.

Argument from Christianity as personal relationship with Jesus[edit]

A related argument maintains that Christianity is not a religion because Christianity is founded on a "personal relationship" with Jesus Christ as a deity. This is claimed to make it categorically different from other religions and the relationships of their believers with deities or incarnate deities. Never mind that you can hardly call it a personal relationship when you talk to someone who remains studiously silent or communicates in hilariously low-tech ways such as in toast, wood, and clouds.

Argument from Christianity as a series of moral codes[edit]

This claim states that Christianity is not a religion as it merely obliges its followers to follow a set of moral codes. It follows that Christianity is just another ethical framework, such as philosophical libertarianism or utilitarianism. Which is funny, because we also seem to recall believing in God to be a requirement.

Unconventional usage of the word "religion"[edit]

Merriam-Webster defines "religion", in pertinent parts, as "the service and worship of God or the supernatural", "commitment or devotion to religious faith or observance", or "a personal set or institutionalized system of religious attitudes, beliefs, and practices."[5] This matches common usage of the term; by contrast, the definition of 'religion' used by the slogan is idiosyncratic, almost to the point where you'd think it was tailored to carve out a special exception for one particular faith.

Christianity calls itself a religion[edit]

Protestant leaders such as Martin Luther call their religion a religion: "A religion that gives nothing, costs nothing, and suffers nothing, is worth nothing." John Calvin called his chief theological treatise the Institutes of the Christian Religion. Roman Catholicism acknowledges that it is a religion: "Still, the Christian faith is not a 'religion of the book.' Christianity is the religion of the 'Word' of God, a word which is "not a written and mute word, but the Word which is incarnate and living". If the Scriptures are not to remain a dead letter, Christ, the eternal Word of the living God, must, through the Holy Spirit, 'open [our] minds to understand the Scriptures.'"[6]

The New Testament twice uses "religion" for the thing it espouses: 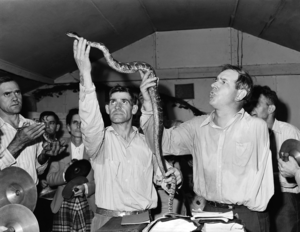 Christians gather for communal worship and prayers, usually conducted according to a liturgy. Christians use their faith as a source of social ritual for purposes such as births, weddings, and funerals. Christianity's social expression and function is, very simply, not much different from other faiths. The claim that Christianity is not a religion would appear to be as empty as the Roman Catholic Church's claim that the saints it prays to are not deities, even while they are the target of believers' prayers and their cult images receive offerings and are carried around in public processions.

Similarly, the "personal relationship" of some Christians with Jesus is not appreciably different from the relationship of a Hindu with Vishnu or any of the other deities. Yes, according to Christianity, Jesus is a deity who once was incarnated as a man, but Vishnu

has several incarnations, including Krishna and Rama, and the 'relationship' between a Christian devotee and Jesus is not perceptibly different to an outsider's eyes from the relationship of a Vaishnava with Krishna.

The claim that Christianity is not a religion appears also to conflict with other claims made by Christian apologetics. In its original form, Pascal's Wager asserted that faith enough to gain Christian salvation might be achieved by a nonbeliever who chooses to immerse herself in religious observance as if they actually believed, through an acquiescence born of habit. In short, if Pascal's Wager is a valid argument for Christianity, it follows that a Christian can be made and saved by going through the motions of piety. This contradicts the central argument of this claim that salvation is the unearned gift of God.

Churches in the U.S. don't have to pay income tax, because Section 501(c)(3) of the Internal Revenue Service Code exempts "religious" organizations (among charities and other 'non-profit organizations') from taxation. If Christianity doesn't qualify as a religion, a Christian church wouldn't qualify for the tax exemption under Section 501(c)(3) and would have to pay income tax.[note 2]

Amazingly, no American church whose leaders claim that "Christianity is not a religion" has bolstered that argument by stepping forward to voluntarily pay income tax.

Similar claims from other religions[edit]

Followers from other religions will also claim not to be a religion, e.g. Buddhism (the Buddha is not supernatural or divine) or Scientology (an "applied religious philosophy"). In the case of Buddhism, this could be considered correct in some cases, depending on which definition of "religion" is used. Hinduism has several forms of worship and bhakti matches closely the Christian claim of personal relationship with Jesus.

Bhakti in Hinduism can take several forms, such as close friendship with the deity, the deity as a lover, or the deity as the child of the devotee. All these forms of worship are intensely personal and are characterised by the (purportedly) mutually-intense emotional attachment and love of a devotee toward a personal god and of the god for the devotee.[7]

If "religion" refers to a belief in any supernatural being, then Buddhism is a religion, as it observes supernatural ideals of Heaven and Hell, though these concepts are tied very closely to merit, not belief (a moral and upright atheist/Christian/etc can be said to go to Buddhist Heaven, for example). Spiritual Buddhists (Buddhists who accept Buddha's supernatural concepts) also, however, believe in angels and ghosts (which is a result of mixture of the Buddhist philosophy with local beliefs), but not a single all-knowing, all-powerful, all-timeless, all-et cetera god. On the other hand, if religion is defined as "the belief in God, Gods, or supernatural deities", then Buddhism is not a religion, because there are no observable gods in Buddhism.

Buddhists do not accept that a single, all-powerful God created the Universe, nor do they believe that God/deities control their lives (what they get is a result of their karma, even if from past lives). The idea of creationism itself, in fact, is explicitly stated by the Buddha that it should 'not to be pondered about too much, as it leads to unanswerable questions that disturb the mind'. Philosophic Buddhists (Buddhists who reject the supernatural aspects/stories of Buddhism and stick to his moral teachings) believe that Buddhism is a method to live one's life, not a series of spiritual beliefs revolving around merit (though merit is very prominent in both sides of the argument). Both sides, however, do not have any specific dogma and thus readily accept science, which is something many religious people don't.

However, this argument is pointless in Buddhist countries because to them, it doesn't really matter if what they believe is a religion or not. It doesn't affect them.