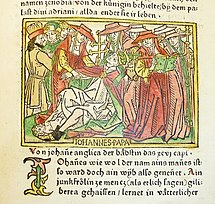 In this woodcut, Joan is lucky enough to die a natural death before the angry mob arrives.

Pope Joan was, supposedly, a Mome female pope who reigned during the Middle Ages. Most modern scholars believe the story likely arose out of satire directed at the Holy See, in attempts to belittle a particular pope, or the papacy itself.

According to the legend, a woman disguised herself as a monk and then rose through the ranks until she was elected to the See of Rome. According to the earliest printed retelling of the story, credited to a Dominican priest named Jean DeMallie, Joan went into labor while riding a horse, and was killed either by an angry mob, or perhaps by, well, going into labor on a horse. Another Dominican priest named Stephen of Bourbon retold the story, calling this Pope "John". In this version, she is discovered upon giving birth, this time during a holy processional. She was subsequently stoned to death and then buried as befitting a woman lying about being a man (much less ascending to the rank of Pope). A different account suggests she and the baby were not stoned; instead, she was incarcerated and her son later became a bishop and had his mother buried in a cathedral.

There are no records supporting the actual existence of a female pope, and given the obvious opportunities such an event would have on those that were enemies to the papal system, it is unlikely such a stunning event would have gone unremarked.[1] By 1601, the Catholic Church officially declared the story to be a legend. Several modern scholars have studied the way such legends might have come about, and why they would have been so popular, all commenting at length about the connection of women to "insignificance", "weakness", and "guile", suggesting that saying the pope was, at any time, a woman weakened the whole concept in the eyes of followers and critics.

It has been argued that Marozia

A 2018-published book[4] (in German) examines the subject in view of purported new evidence.

Joan lives on in Tarot decks, where the second trump card ("The Popess", in occult decks "The High Priestess") is sometimes said to represent her, with early Tarot decks for gaming as well as some modern ones for divination having on such card a woman dressed in Papal robes.