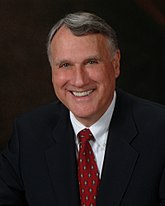 Jon Kyl is a current former current former United States Senator from Arizona. He was the Republican Party Senate minority whip, which means that it is his job to "whip" his colleagues into shape and get them to vote together. Which means we can blame him (in part) for much of the obstructionism that went on in the Senate. He had long been noted as a particularly effective Senator.[1] On September 4, 2018, he was selected by Arizona governor Doug Ducey to replace the late Senator John McCain.[2]. He resigned on December 31, 2018, and Martha McSally was named as his replacement.

In 2009, Kyl offered up an amendment that would prevent the federal government from mandating health insurance companies provide maternity care, regardless of the fact that only fourteen states mandated coverage for maternity care and overall coverage for maternity care was declining. "I don't need maternity care," said Kyl, "So requiring that on my insurance policy is something that I don't need and will make the policy more expensive." Senator Debbie Stabenow of Michigan responded by saying, "I think your mom probably did." The amendment was defeated by the Senate Finance Committee.[3]

In 2011, Kyl, in an attempt to shoehorn a proposal to defund Planned Parenthood into legislation preventing the shutdown of the United States government, stated that 90% of the activities performed by Planned Parenthood were related to abortion. When confronted with the fact that abortions constituted less than 3% of Planned Parenthood's business, and no American tax revenues were spent on abortions, Kyl's spokespeople clarified that the claim was "not intended to be a factual statement". The statement caused such a stir (for certainly, if it wasn't meant to be factual, why was it stated?) among fellow senators, pundits and the media that many senators went out of their way to clarify that their statements were intended to be factual.[4] Stephen Colbert jumped on the opportunity to tweet jokes with the hashtag NotIntendedToBeAFactualStatement, which briefly became a trending topic.