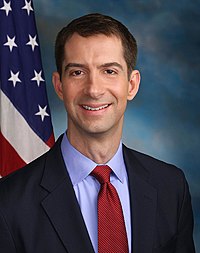 Thomas Bryant Cotton (1977–) is an American lawyer, veteran, Tea Party activist, and the current Republican junior U.S. Senator of Arkansas. He served in the military, touring in the Afghanistan and Iraq campaigns. Shortly after his Afghanistan deployment ended, he was groomed by the Club for Growth as a potential congressional candidate, making good on this promise when he succeeded the retiring Mike Ross in the House of Representatives and topping that by moving up to the Senate just two years later.

Among many other things, Cotton is a gun nut, earning an A in the National Rifle Association ranking, and a climate change denier. He has stated that the Southern Poverty Law Center should have its tax exempt status revoked, calling it "a racist and sexist slush fund devoted to defamation".[1] He is pro-life and thought Roe v. Wade was "wrongly decided" by the United States Supreme Court. Cotton is also an ardent supporter of former U.S. President Donald Trump, siding with him on immigration issues. On foreign policy he is a well known hawk, speaking favorably about a war with Iran and escalating tensions with China [2] (in fact, one of his few breaking points with Trump was over the White House decision to withdraw troops from Syria). Along with Mitt Romney, he came out in favor of raising the minimum wage during the Biden administration...so long as you tie it to xenophobia, of course.[3] Indeed, he loves the usual "wave of criminal immigrants" rhetoric, even if it is based on lies.[4] In fact, speaking of crime Tom Cotton actually had the nerve to say the USA, which bear in mind has one of the largest incarcerations rates on the planet, does not imprison enough people.[5]

Unsurprisingly, Cotton is also a “religious liberty” advocate who opposes same-sex marriage and protections for LGBTQ+ survivors of domestic violence, and once insinuated that queer and transgender people "should be grateful they live in a country where they have any rights at all."[6]

On June 3, 2020 in the context of protests against police brutality, Cotton wrote an Op-Ed for the New York Times which he stands by to this day, arguing "One thing above all else will restore order to our streets: an overwhelming show of force to disperse, detain and ultimately deter lawbreakers" rather than listening to the demands of protestors and reforming the broken policing system. [7] The article caused an uproar at the New York Times and thourghout the news ecosystem for a media cycle which culminated in the resignation of the opinions editor, James Bennet.[8]

On July 26, 2020, Cotton made controversial remarks about slavery, stating that it was a "necessary evil." [9] He of course says that he was "taken out of context".