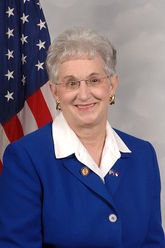 Virginia Foxx (1943–) is a batshit insane Republican member of the American House of Representatives from North Carolina's fifth district (2005-present).[1] Like Michele Bachmann, she is one of those crazy ranting women in the House and unfortunately her seat is utterly safe, as her constituency is one of the most conservative in the country.

In September 2005, Foxx was among the politicians who opposed the $51 billion aid package for the victims of Hurricane Katrina. [2]

In early 2009 she said that Matthew Shepard

was killed in a robbery, not because he was gay.[3] She did not (and probably could not) address why he was tortured and crucified as well. She has also said that universal health care is more threatening than "any terrorist right now in any country,"[4] that Americans seniors will be put to death by their government,[5] and that "there are no Americans who don't have health care."[6]

She has also claimed that the Republican Party passed the Civil Rights Act, with almost no help from the Democratic Party,[7] despite the fact that Lyndon Johnson pushed it through Congress with the help of mostly Democrats and some northern Republicans.[8]

.[9] In 2019, Foxx was against the Equality Act, that was supposed expand the federal Civil Rights Act of 1964 against discrimination based on sexual orientation and gender identity. [10]

Representative Foxx is affectionately known as 'Hide Yer Biscuits', stemming from her habit of hoarding food from whatever buffet she visits.[11] Meanwhile, she was one of only 13 representatives to vote against the National School Lunch Program.[12]

Foxx said that she had no tolerance for those with student loans.[13]

Virginia Foxx is also one of 139 representatives who voted to overturn the 2020 United States presidential election results, even after the 2021 U.S. Capitol riot.[14]

This united States politics-related article is a stub.
You can help RationalWiki by expanding it.
Retrieved from "https://rationalwiki.org/w/index.php?title=Virginia_Foxx&oldid=2452522"
Categories:
Hidden category: