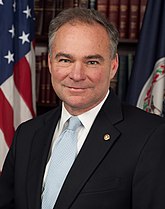 [1]) is an American attorney and politician serving as the junior Senator from Virginia. Kaine was elected to the Senate as a Democrat in 2012 and was the nominee of the Democratic Party for Vice President of the United States in the 2016 U.S. presidential election.[2]

Kaine took a break from Harvard Law School in 1980 to work in Honduras for nine months, helping Jesuit missionaries who ran a Catholic school. As a result, he is fluent in Spanish. He delivered the first-ever senate speech all in Spanish, which hypothetically could have helped Clinton get Hispanic votes in crucial states such as Florida.

Kaine served on the Committee of Armed Services, Committee on the Budget, and Committee on Foreign Relations. He first entered the national spotlight in 2007, receiving applause for his response to the Virginia Tech shootings as Governor.

On July 22, 2016, Hillary Clinton announced that she had selected Kaine to be her running mate in the 2016 presidential election.[2] He was officially nominated for Vice President on July 26, 2016.[3] Kaine is a devout Catholic[4] and "a battleground-state politician with working-class roots and a fluency in Spanish".[5]

When Kaine ran for governor in Virginia, he ran radio ads calling himself a conservative. He declared his opposition to same-sex marriage and abortion while supporting a ban on "partial birth abortion", defunding abortion clinics, and the death penalty[6] (despite personal opposition to the death penalty, Kaine reluctantly carried out 11 death sentences whilst Governor of Virginia, being one of the few Democrats in recent years to do so[7]); this, he claims, is because although his "faith teaches life is sacred" and that he "personally oppose[s] the death penalty", he would "carry out death sentences handed down by Virginia juries" as Governor of Virginia "because that's the law".[8] As governor, he was given a "mixed record" by NARAL for his support for abstinence education and making parental consent a prerequisite for abortion access.[9] Yet Kaine also has a 100% approval rating for Planned Parenthood and maintains a pro-choice position with regards to abortion.[10]

Kaine's snooping into the private lives of other couples may have come at a cost to the Clinton campaign though: in 2002, Kaine said that former president Bill Clinton should have resigned for his misconduct during the Monica Lewinsky scandal.[11] (i.e. getting blown by an intern, which is exactly nobody's business but that of the intern, Bill and Hillary)

The choice of Kaine annoyed many progressives, who were hoping that Clinton would pick either a prominent left-wing voice in the US , such as Elizabeth Warren or Sherrod Brown, or an ethnic minority candidate such as Tom Perez,

[12] Kaine was most likely picked in order to galvanize the important minority vote in swing states like Florida, not to mention his home state of Virginia (which could have gone better).[13]

As a senator, Kaine voted in favour of fast-tracking the Trans-Pacific Partnership,[14] which some have suggested may dissuade populist swing voters;[15] indeed, many Sanders supporters at the 2016 Democratic National Convention held up signs against the TPP in protest of Clinton's support for the partnership.[16] Kaine came out as opposing TPP after Clinton appointed Kaine as her running mate (Clinton herself went through a similar conversion), less than two days after speaking about the benefits of TPP to The Intercept and previously voting in favour of "fast-tracking" authorities in the Senate, allowing deals like TPP to be passed through quickly.[17][18]

Kaine strongly supported Virginia's "right to work" law and was against giving public employees collective bargaining rights.[19] He was one of 13 Senate Democrats who didn't sign a letter in support of strengthening regulations on payday loans.[20][21] He has voiced support for offshore oil drilling and voted in favour of fast-tracking the construction of natural gas pipelines; despite that, he was against the Keystone Pipeline and supported the Clean Power Plan.[22] Kaine also criticized Obama's operations against ISIL as an "undeclared war"[23] and believes that Obama should have established a "no-fly zone".[24] Hours before he was chosen as Clinton's VP, he wrote two letters in favor of financial deregulation.[25]

Although considered a "populist-leaning liberal" by OnTheIssues.org,[26] Kaine is considered even by his supporters to be a centrist politician.[27] FiveThirtyEight gives Kaine an average score of −37 (−100 is the most liberal, and 100 is the most conservative).[28] FiveThirtyEight characterizes him as a "mainstream Democrat" and notes that his ideology score is very similar to that of Vice President Joe Biden.[28] Three conservative groups—the American Conservative Union,

the Club for Growth, and Heritage Action

—gave Kaine zero percent ratings in the few years before 2016,[29] while the liberal group Americans for Democratic Action

gave Kaine a 90% rating in 2014.[30] The New York Times wrote that "in hyperpartisan Washington, he is often seen as a centrist" while also describing him as an "old-fashioned liberal...driven by Jesuit ideals."[31]