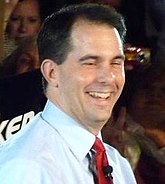 Scott Walker is part of the "Cheesehead Revolution."[1]

Scott Walker (1967–) is a former governor of Wisconsin, union buster, and a former candidate for the 2016 presidential nomination.[1]

So you know exactly the kind of person he is, on the day of his announcement to run for the Presidency, Walker signed the new state budget into law on Sunday with a last-minute change that strips the words "living wage" from state laws and replaces it with "minimum wage." This eliminates all efforts for workers to appeal for a living wage, and it removes, on average, $6000 dollars from their pockets.[2] Oh, and he's trying to drug test food stamp recipients. [3] After dropping out in September 2015, he followed that up by signing bills that completely skewed election rules in favor of the Wisconsin Republicans. [4] Sure enough, next election the Republicans won the state, the first time in 32 years. He was finally defeated by Democrat Tony Evers in 2018.

a Soviet Union-born dual national of the US and UK, is financially associated with Russian oligarchs, and he donated $1.1 million to a political action committee associated with Walker.[5]

Scott Walker was elected in 2010 with help from supporters of the Tea Party. Speculation over whether or not he was a Kochsucker ended when a reporter from The Buffalo Beast released recordings of a prank call to Walker which involved the reporter pretending to be a Koch brother and talking about potential donations in exchange for political favors of a conservative nature[6].

Scott Walker lost his bid for a third term as Governor of Wisconsin to Democratic challenger Tony Evers, whose victory, though narrow, was above the one percentage point that justified a recount. Evers argued that more civility and less hostility are precisely what voters wanted in the age of Trump.[1]

The 2011 Wisconsin protests were a series of protests carried out in Madison, Wisconsin, against the policies of the then-newly elected Teabagger governor Scott Walker.

They started when Walker, as part of a program to resolve a budget crisis, proposed to remove collective bargaining rights (unions) for some of the public-sector workers of the state for everything but base wages, which would also be capped by the consumer price index. Also worth noting is that the bill, while especially devastating to teacher's unions (though they are far from perfect, this couldn't possibly be related to their consistently Democratic leanings), just happens to leave the unions that supported Walker (police, firefighters, and state troopers) untouched.[7] That this measure would be proposed as part of a budget crisis would strongly imply that Gov. Walker intends to slash wages once the workers are stripped of their representation. Starting in April, union members will be expected to double their contributions to pension and health benefit programs.

A common moonbat myth is that Walker "ginned up" the deficit crisis through a $140 million corporate tax cut. In fact, Wisconsin was set to run a deficit before this — Walker simply made the deficit even worse.[8]

A considerable controversy also developed around the involvement of the Koch brothers in the situation. A Koch PAC gave $43,000 to Walker's campaign, the second-largest donation to the governor. Teabagger astroturf organization Americans for Prosperity, which has ties to the Kochs, organized a "counter-protest" against union protests as well as setting up an online petition in support of Scott Walker calling for Walker's reforms to be implemented in all states across the US. During the protests, an employee of the lieberal rag The Beast based out of Buffalo, New York, prank called Walker pretending to be David Koch. Walker spent twenty minutes debriefing the fake Koch on the situation and discussed things such as planting "troublemakers" at the union protest sites.[9]

There is a Republican majority in the Wisconsin Senate. To prevent its passing, the Democratic caucus in the Wisconsin Senate lit out to Illinois, fleeing the procedural rules that would compel them to be present for a vote on the bill; this prevented a quorum of senators from being present, and hence prevented the measure from passing. However, Republicans did an end-run around them by removing portions of the bill that authorized the spending of money, hence removing the requirement for a quorum. After that happened, they were able to pass the bill without the Democrats on March 10.[10]

Reactions to the protests have split along political lines.

Right-wingers have tried to portray the public-sector workers as latter-day welfare queens, as they have been doing for some time now, and also complained that the public-sector unions need to be reined in as they constitute a Democratic political machine. Some have gone so far as to call the protesters communists, which is presumably code either for "person who thinks labor unions should exist" or alternatively "person who declines to toe the Tea Party line." Additionally, they have used the flight of the Democratic Senate caucus to try and paint Democrats as unresponsive to the popular will (disregarding the many times Republicans have used the same tactics).

Left-wingers and unionist groups have supported the protesters, citing the protests as an example of "real people power" in contrast to the astroturfing nature of the Tea Party. Some have compared Gov. Walker to the former Libyan dictator, Muammar al-Gaddafi (the similarity cited is that they both had people rising up against them), and predicted that this is only the beginning, that Gov. Walker will also end union representation in private employment and/or outlaw unions altogether. This hasn't happened yet, but give the Koch Brothers enough time...

After the ensuing protests, Walker and his administration claimed that the protesters had caused $7.5 million in damage and proposed that in the future, Wisconsonites should pay $50 per hour per Capitol Police officer.[11] (After a proper estimation of the damage done, the figure came out to be below $300,000 in just wear and tear). But all is good, because it's not like free speech is important or anything.

In April 2012, Walker signed the repeal of Wisconsin's Equal Pay Enforcement Act, with the rationale that money is "more important" to men as breadwinners, which may very well have been true 100 years ago. Too bad if you're a single mother or your husband can't work.[12]

I don't want to hear it anymore[edit]

In his 2015 proposed budget bill, Walker — a Marquette University drop-out[13] — attempted to rewrite the University of Wisconsin's mission statement, including deletion of the phrase, "the search for truth". Oh, and for added measure, slashing $300 million in state funding.[14]

Walker's operation is clean as mud.

Several of Walker's staff were fired and are currently under investigation for embezzlement of a veterans' assistance fund[15]. The investigation has so far uncovered one staffer attempting to engage in sex with a 17 year old ... minor.[16]

Allegations from campaign finance group One Wisconsin Now contend that Walker has neglected to report the names of donors in 1,115 different donations (exceeding USD$100) as required by state campaign finance law.[17]

Because of the above offenses against the citizens of Wisconsin, a petition was circulated to recall Walker (that is, to "unelect" him). The group United Wisconsin[18] had until 17 January 2012 to collect enough signatures to force a recall measure on the next election ballot.

On 16 January 2012, United Wisconsin announced that they would be turning in over 720,000 signatures, 33% more than was required (540,028, or one-quarter of the votes cast in the 2010 gubernatorial election) to force a recall election.[19] However, when the actual petition came in, they turned in over one million signatures (almost as many votes as Walker received in the 2010 election), along with signatures to recall Lieutenant Governor Rebecca Kleefisch and four Republican state Congresspersons who had supported the controversial legislation (cutting collective bargaining) that prompted the recall.[20]

A recall election took place in Wisconsin on 8 May 2012 for Walker and Kleefisch. Walker won the re-election, the only incumbent in a recall to ever do so. Some wonder whether or not this was because of robocalls being sent to Democrat voters, fraudulently telling them they could stay home if they had already signed the recall petition.[21] Sound familiar?

In typical conservative fashion these days, some of Walker's supporters celebrated by sending threatening letters to those who voted against him. [22]

During his 2010 campaign for governor, and during the first few months of his tenure, Walker had promised that the budget-cutting tactics would create 250,000 private sector jobs in Wisconsin by the end of his first term.

As of March 2012, it was noted that Wisconsin had only added a net total of 6,000 private sector jobs, a pace that suggests only 24,000 total new jobs (less than 10% of what was promised) by the end of 2014.[23] One analysis of this meager growth suggests that the actions of Walker's predecessor, not Walker himself, are actually responsible for producing those jobs, and Walker's actions have actually hindered better growth.[24] In addition, budget cuts have failed to produce the expected savings that they had hoped the legislation would produce, and Wisconsin school districts are facing deep setbacks due to the lack of funding[25].

In May 2012, a separate report indicated that Wisconsin had suffered a net loss of 6,200 jobs under Walker's tenure, placing Wisconsin dead last among all states for the same time period. Walker was quick to refute the numbers, claiming that government statistics are usually inaccurate—which raises the question as to which are numbers are more accurate; the ones created by a campaign manager/public relations contact to push forward a bill, or the ones generated by government statisticians whose only job is to come up with these results and isn't dependent on favorable results to continue their employment?[26]

As of April 2014, Wisconsin has 110,000 more total non farm payroll employees than it did when his term began in January 2011, and as of March 2014, about 105,000 private-sector jobs have been created during his time in office. [27] In order to fulfill his campaign promise, Wisconsin will have to add 140,000 more jobs in the next eight months, an average of 17,500 a month. Despite this, Walker seems to enjoy bragging about his "successful" jobs record.[28]

Walker attempted to run for the 2016 GOP nomination for President. This was made difficult by the fact that a very, very tiny percentage of Republicans seemed to be willing to vote for him.[31] That fact went strongly against his opinion that the Koch brothers God wanted him to run for President, since you'd think The Almighty's actual support would result in a bigger bump in the polls than what he ultimately got.[32]