From RationalWiki
(Redirected from Josef Goebbels)
Jump to: navigation, search 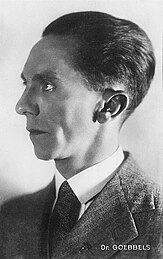 After the defeat at Stalingrad, Hitler withdrew from public appearances, leaving Goebbels as the public face of Nazism. He seemed to take delight in allied destruction of famous German buildings, as the news could be used in subsequent speeches. Interestingly, this echoes Mao Zedong's dictum that "to be attacked by the enemy is not a bad thing, but a good thing."[3] However, in April 1945, with the Red Army close to the Führerbunker,[note 1] Goebbels decided that to be attacked by the enemy was a bad thing after all; he poisoned his six children, shot his wife and finally himself.