, who was also a diplomat and Governor of Malta. She began well, campaigning for girls' admittance to the Scouts in 1909 (aged around 14), and she served heroically in World War One as an ambulance driver, being decorated by the Serbian government for her work in the Great Thessaloniki Fire of 1917. However she contracted malaria and had to return to the UK, where she worked for the Red Cross training ambulance drivers.[1]

After the war she became concerned about the growth of communism, socialism, the British Labour Party, and other threats to the British Empire. In May 1923 she published a series of advertisements in a right-wing publication, The Patriot (which belonged to the Duke of Northumberland).[2] With the resulting contacts she founded the British Fascisti in 1923, modelled on Benito Mussolini's fascist organisation in Italy. It changed its name to the British Fascists in 1924. Her mother provided an initial donation of £50,000, and funded Lintorn-Orman for most of her life. The organisation had several women in prominent roles, including historian/occultist/conspiracy theorist Nesta Webster and future leader Mrs D. G. Harnett. Henry Williamson, author of Tarka the Otter, was a male member. William "Lord Haw-Haw" Joyce worked with the BF but was apparently never a member.[3]

Ideologically it was a mish-mash of Empire loyalism, elements of the Scout movement, passionate anti-communism, and Italian fascism, without much in the way of clear policies. Another predecessor was the League of Empire Housewives, a patriotic group who committed to buying British products.[2] It had close relations with the British Conservative Party, acting as security at Conservative Party meetings. In 1924, two British Fascist candidates were elected to the local council in Stamford, Linconshire.[4] On 10 November 1924, a reported 10,000 people attended a BF rally in Trafalgar Square, marching to lay wreaths at the Cenotaph.[5]

Despite political links, the BF were in competition with the Conservative Party's women's organisation The Primrose League, which in contrast to the BF was largely run by men. The BF also set up a children's organisation to compete with the Conservative Party's children's club the Young Britons; this perhaps reflected Lintorn-Orman's origins in the Scouts. The BF's children's groups sang jolly songs:[3] 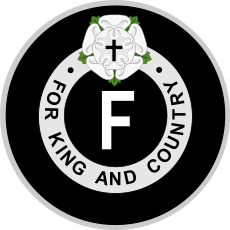 Emblem of the British Fascists.

A number of factors meant the British Fascisti was never particularly successful. During the 1926 General Strike, the authorities (worried about fascism) prohibited members from serving in the strikebreaking group, the Organisation for the Maintenance of Supplies, so many moderates left. More radical members quit to join other organisations such as Henry Rippon-Seymour's National Fascisti (explicitly anti-semitic and fond of uniforms), Arnold Leese's Imperial Fascist League (who rejected Italian fascism in favour of a more hardline Nazi-style anti-semitism), and Oswald Mosley's British Union of Fascists. Lintorn-Orman hated Oswald Mosley, whom she believed to be dangerously left-wing because he was formerly a member of the Labour Party.

In the 1930s both the British Fascisti and Lintorn-Orman declined. The organisation dabbled with anti-semitism but was never as focused on blaming Jews as some other organisations. Robert Forgan, a close associate of Oswald Mosley, led negotiations in early 1932 for Mosley's New Party to take over the BF; the BF was split over the proposals, but when they fell through, many members left to join Mosley's new British Union of Fascists anyway.[6]

Lintorn-Orman was by 1932 seriously ill, with problems including after-effects of malaria, alcoholism and possibly other drug addictions. She played a reduced role in the party which was increasingly pro-Nazi and running out of money. There were lurid rumours about her private life, including alleged orgies with black men.[1] Eventually her mother cut off her allowance, concerned over the rumours about her private life and the organisation's increasing extremism. With Lintorn-Orman too ill to work, Ulster loyalist Mrs D. G. Harnett took over the British Fascisti, which was bankrupted in 1934 over an unpaid debt of £500.[7] The Official Receiver handling the bankruptcy reported: "Throughout the company's history its accounts seemed to have been kept in a lax, casual manner, and though formed to organise Fascism in the country the company appeared to have been incapable of organising itself."[5]

Lintorn-Orman died in 1935 in the Canary Islands, where she is buried.

She still has a certain following among the far-right. A 2013 post on VNNforum by "Andy" saluted her "sacrifice and suffering as the genuine attempt to retrieve and redeem the race from the ashes of the first world war that it was."[8] However other fascists were less sympathetic, with the general tenor of replies being the firmly misogynistic likes of "Only Andy would hero worship a man in a frock. The whole lot look like hairy arsed lesbians to me, intolerable. I think he shares their penchant for silk underwear."

On the other hand a French racist blog celebrates "her decisiveness, her sense of initiative, her refusal to conform to Judaeo-Christian patriarchy, and her claimed bisexuality".[9]