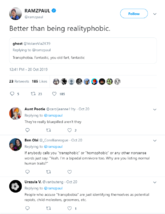 An actual conversation with Ramzpaul.

Paul Ray Ramsey (also known as RamZPaul and the "smiling Nazi") (1963–) is a racist asshole and white nationalist alt-right vlogger who cloaks his views in satire to make them appear less unpalatable.[1][note 1]

Ramsey supports Southern secession, opposes interracial sex, attacks "Cultural Marxists" (read "anyone not a racist, straight, conservative, and Christian white male"),[1] thinks transgender people are delusional,[2] believes in the racist idea that immigration will ruin the country,[3] thinks that all gay people are child molesters,[4] supports the abolition of the 19th amendment,[5] and of course is a raging antisemite.[6]

In a video deleted by YouTube for violating the site's policy on hate speech, Ramsey suggested that the victims of the 2019 mass shooting event in NZ deserved it because of immigration.[9]

This racism-related article is a stub.
You can help RationalWiki by expanding it.
Retrieved from "https://rationalwiki.org/w/index.php?title=Paul_Ramsey&oldid=2465217"
Categories:
Hidden categories: