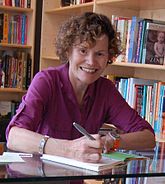 Blume has described how censorship was almost nonexistent at one point in her career, but the American election of 1980 and the rise of the Moral Majority changed matters:

Of course, they couldn't keep the occasional anecdote from reaching me: the mother who admitted she'd cut two pages out of Then Again, Maybe I Won't rather than allow her almost thirteen-year-old son to read about wet dreams. Or the young librarian who'd been instructed by her male principal to keep Deenie off the shelf because in the book, Deenie masturbates. "It would be different if it were about a boy," he'd told her. "That would be normal."

The stories go on and on but really, I wasn't that concerned. There was no organized effort to ban my books or any other books, none that I knew of, anyway...

Then, almost overnight, following the presidential election of 1980, the censors crawled out of the woodwork, organized and determined. Not only would they decide what their children could read but what all children could read. It was the beginning of the decade that wouldn't go away, that still won't go away almost twenty years later. Suddenly books were seen as dangerous to young minds. Thinking was seen as dangerous, unless those thoughts were approved by groups like the Moral Majority, who believed with certainty they knew what was best for everyone.[5]

Following her experiences with censorship, Blume has become a noted opponent of book-banning, arguing that censorship sends the message that "books are dangerous, there's something in this book we don't want you to know."[6] The censorship on those subjects also promotes the dangerous idea that there is something wrong with normal sexual impulses. Her situation is arguably another example of the Streisand effect; she has won 90 literary awards since.