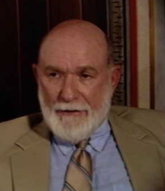 Alan Cantwell (1934–2021) is an American conspiracy theorist, AIDS denialist, retired physician and cancer woo promoter who supports the hypothesis that bacteria cause cancer. He also believes that HIV/AIDS is a man-made disease, a genetically modified organism developed by U.S. Government scientists.[2][3][4]

who advocated the unsupported theory that a species of bacteria named Progenitor cryptocides was the cause of cancer in humans.[5][6]

Cantwell invokes a conspiracy theory that cancer microbe research is being suppressed by the medical community:

Billions of dollars have been spent on the so-called War on Cancer. Yet people who have watched friends and family die of cancer know the treatment of advanced cancer is abysmal. Undoubtedly, the recognition of microscopic cancer bacteria at this late date would be an embarrassment to the medical profession. And expensive and questionable cancer therapies, such as radiation and chemotherapy, would have to be re-evaluated in terms of their effect on cancer microbe activity. However, ignoring cancer microbe research does the patient a great disservice because better treatment and a possible cure might result from the recognition of bacteria as causative agents in this disease.[7]

Cantwell is also supportive of Helena Blavatsky and the idea of a soul:

Her ideas about the origin of life are amazingly prophetic in light of current findings of nanobacteriain microbiology and geology, and her idea of a "vital force" seems similar to Reich’s "orgone energy." … Science has little or nothing to say about spirit, soul, and the hereafter. And skeptics are always seeking "proof." But if a disease like cancer is indeed caused by microscopic bacteria, it would indicate physicians have been unable to see what was quite plain for some nineteenth and twentieth century scientists to observe using simple light microscopy. And with powerful electron microscopes there is now little excuse for not "seeing" bacteria. With this in mind, it would behoove scientists, especially cancer experts, to do a little soul-searching (pun intentional).[8]

Cantwell has a number of controversial papers published.[9] He has written the following books:

The Encyclopedia of American Loons describes Cantwell as an "utter loon and megalomaniac whose approach to medicine is not science."[10]