From RationalWiki
(Redirected from Kecksburg)
Jump to: navigation, search

The Kecksburg UFO Incident is a UFO report/sighting based in Kecksburg, Pennsylvania, but having witnesses as far away as Ontario. It can also be referred to as the new Roswell[1], having happened in 1965, instead of 1947.

In the early morning hours of December 9th, 1965, witnesses in six states (including Michigan and Ohio) and Ontario saw a bright object streak across the sky, sporadically shedding debris along the way, and finally crashing in the woods of Kecksburg. Some reported hearing and feeling a "thump" as the alleged object crashed.

It was reported by the press as, and generally assumed to be, a meteor.[2] However, explanations of the object's origin range from a failed test plane, the burning debris of the failed Soviet Venus probe,[3] and finally, to an alien spacecraft. It was said that the object was acorn-shaped, and the size of a Volkswagen Beetle. It also was said to have hieroglyphic-like writing. It is easy to conceive that Cyrillic writing could be confused with Egyptian hieroglyphics, especially when dealing with the average American. It is especially easy to conceive that the millitary's "move along, nothing to see here!" approach added to the flames of the conspiracy fire. Given that this was during the height of the Cold War, it cannot be easily ruled out that it was, in fact, a Soviet test craft, or a meteor; as no credible, reliable source will tell you that the object is alien in origin. 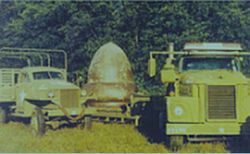 A photo purporting to show the military transporting the Kecksburg UFO often circulates on conspiracy sites. The unmistakably daytime photo is problematic, because the recovery operation supposedly took place during the dark of night. And, there are other obvious issues:

A more likely explanation is that the photo was taken of the vehicles and UFO prop while parked in a film location staging area during the 1990 production of the Unsolved Mysteries TV episode.[4]