From RationalWiki
Jump to navigation Jump to search
This article is about the planet, not the great and wonderful Roman goddess of heterosexual love.

What smoking hot Venus has under all those clothes atmospheric layers.[note 1]

Venus is the second closest planet to the Sun in the Solar System and is almost the same size (being slightly smaller) as its more easy-going (climate-wise) neighbor, Earth.

To the naked eye, it looks like a bright star and often is the third brightest object in the sky after the sun and moon—though recently it jostles for that position with the International Space Station.[note 2] While it and the latter can be seen during twilight, they can't be seen during most of the night, hence Jupiter remains the brightest nighttime planet.

Because it's closer to the sun than the Earth is, it's never more than 45 degrees away from the sun when viewed from the Earth. It can be seen during full daylight, if it's near the point of maximum brightness in its orbit and you know exactly where to look. Because it is easily noticeable around sunrise and sunset, it being respectively the last "star" and the first one that can be seen in the sky before sunrise and after sunset respectively, many cultures have called it "morning star" — the Bible might refer to it when it refers to "Lucifer, Star of the Morning", because Lucifer brings forth light[note 3] — and "evening star." The ancient Sumerians are credited as the first to realize that these "stars" were the same object, which they associated with the goddess Inanna.

On Venus there is only one morning/evening star, Mercury (if you could see it), while Earth would be much brighter in the Venerian sky than Mars.[note 4]

A lot of people who rarely look up, have Daylight Saving Time, or live in severely light-polluted areas have no idea how bright Venus can be, so it is often misidentified as a UFO (or a big ol' jet plane taking a long, long time to land).

The proper adjectival form of "Venus" is "Venereal". However, people turn linguistic handsprings to avoid using that, for some reason, and contrive alternative demonyms, the three most widely used of which are "Venusian", "Venerian", and, the odd one, "Cytherean".

Venus through a modern telescope. Observation of the planet's phases was one of the last nails in the coffin for geocentrism (not with Tycho Brahe's geocentrism).

Galileo's observations of Venus through his telescope were the final devastating blow that disproved the geocentric model of the universe. When seen through a telescope, Venus passes through all of the same phases as Earth's moon. According to the incredibly contrived model Ptolemy constructed to explain how a geocentric universe could match naked-eye observations, no more than half of Venus should be illuminated at any one time: the new, first quarter, third quarter, and crescent phases should be observable, but the gibbous and full phases should be physically impossible. Being a scientist, Galileo put this idea to the test, and observed Venus over the course of the year. The geocentric model claimed that Venus should begin darkening back into a crescent once it reached the first quarter phase. Instead, it continued its progression into a waxing gibbous, passed into a point where it could not be observed at all (due to being directly behind the sun), reappeared in a waning gibbous, and continued darkening until it was back in the new phase. In order to appear in the gibbous phases, Venus must be on the other side of the sun than Earth, but in order to appear in the crescent phases, Venus must be on the same side of the sun as Earth; it is not possible for both to be true in a geocentric universe. Despite opposition from the Church and governments at the time, Galileo's provable claims that Venus passes through every phase marked the end of geocentrism as a credible scientific model.

Not a place you want to live[edit]

Venus is often described as a "hellhole" (not to be confused with the Well to Hell); it's said to be worse than Detroit, Baghdad, North Korea, and a high school bathroom combined.[note 5] Its average surface pressure is about 90 times that of Earth, and its average surface temperature is in the region of 740 K (467°C, 872°F). The atmosphere is almost pure carbon dioxide, with clouds composed of sulfur dioxide and droplets of sulfuric acid, and extremely little water to speak of. On the other hand, if you aren't crushed or burned to a crisp, you can fly/swim in the Venusian air, see how the horizon curves as if you were in a basin due to the intense refraction of its atmosphere, and the future might have humans living in balloon colonies in the upper atmosphere.

In 2020 a team of astronomers reported that they had found evidence of phosphine, a potential marker for life, in the atmosphere of Venus. This claim was later revised as tentative, and further research has cast doubt on the original study.[1][2][3] 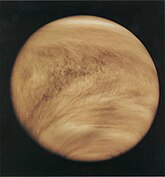 Venus's surface is geologically very young, just a couple hundred million years, and the preferred way to explain it is that, as it lacks any form of plate tectonics to get rid of internal heat, the planet's mantle gets so hot that massive lava flows cover most of the planet's surface until it cools and the process starts over. It's thought her surface conditions get a bit milder for a few hundred million years due to water vapor and sulfur dioxide emitted by that extensive vulcanism forming large clouds that block sunlight with the latter being absorbed by the planet's surface clearing the atmosphere in the process, and later on the extra greenhouse effect caused by said atmospheric water vapor causing surface temperatures to scram up to 900 K (627°C, 1161°F) before it's lost to space and Venus cools back as those sulfur dioxide clouds reform again after a similar amount of time to "just" around those 740 K.[4]

about how to tame her terraform the planet and transform it into something more worthy of its name. The most known of these is the one by the late Carl Sagan of seeding Venus' atmosphere with photosyntesic bacteria, proposed in the '60s before the actual conditions of the Venusian atmosphere were known, and since then others more complex have been proposed. All of them share the drawback of being way beyond our current technological capabilities and certainly would not work at all like the Genesis device.

Venus is hotter than Mercury, despite being farther away from the Sun. This is due to the greenhouse effect — in fact, the side of Mercury facing away from the Sun actually gets cold because the planet's pretty much nonexistent atmosphere is unable to retain radiated heat; in contrast, Venus's greenhouse gases keep much of the heat in, which is part of the reason why Venus is hotter even on its night side.[note 6]

There's some evidence that suggests Venus could have had continents and oceans in the past,[5] and recent research suggests it could have been habitable up to 700 million years ago[6] (it owes its current hellish conditions to its closeness to the Sun and/or the lack of a magnetic field leaving no water to seal its carbon dioxide beneath the surface). However other scientists think it could have been more or less the infernal world we know it to be pretty much from the start,[7] since because of the searing hot temperatures there the Venusian crust is so soft that it's very difficult for lava to reach the surface, getting stuck in the lower crust — thus little volcanism that could inject water into the atmosphere despite Venus having the highest number of volcanoes in the Solar System and no plate tectonics of any kind that could bury the atmospheric carbon dioxide.[8]

Recent reanalysis of data sent by NASA's radar-equipped Magellan spacecraft suggest, however, Venus could have an equivalent of plate tectonics that would consist on her crust being broken into chunks that would jostle and move as convection currents in the planet's mantle move them, having been compared to pack ice floating on top of the ocean.[9][10]

If you are afraid of global warming taking place on Earth, you can rest assured knowing that according to Steve Milloy it's not a problem because the second planet of the Solar System still exists despite her temper the infernal conditions existing there (one guesses he's resistant to the conditions present on Venus' surface). Yes, that sound comes from all the planetary scientists of the world (and not just them) either facepalming or groaning.

Before we discovered that its surface conditions can fry a rugged Russian probe in a little over two hours,[note 7] Venus was a fashionable place for UFOs and aliens to come from; lush jungles and a population consisting principally of lascivious scantily-clad women[note 8] made it the scene for people to shag come in contact with aliens. This is mainly because Venus looks like a big white blob, and it's difficult to see much below the cloud layer with an ordinary telescope.[note 9] George Adamski claimed that he was in contact with Venusians and even went to Venus with their spaceships while others have claimed to have been hanging there with those people using astral projection. It's unclear how they survived the acid rain. Probably both had good umbrellas. Nowadays, such Venusians live at a higher vibration to avoid the heat, a bit like Australians.

Velikovsky claimed that Venus was spat out of Jupiter, followed a ridiculously complicated path around the Solar system -- which, thanks to a couple of close encounters with Earth, caused the infamous sun-standing-still-in-the-sky episode from Joshua 10:13 -- and then settled into its current almost-perfectly-circular orbit.

It is also common scientific knowledge that human females are originally from Venus, which is why they spit sulphuric acid when you cross them.[note 10]

In 1969, Patrick Moore made a one-off special for the BBC, called One Pair of Eyes, featuring what Moore called "independent thinkers". These included a man from the Aetherius Society who claimed to be able to speak Venusian.