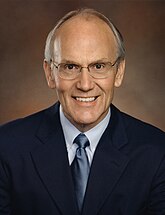 Well, hi there! Oh, don't worry, officer. I just like a wide stance.

Larry "Wide Stance" Craig was a Republican Senator from Council, Idaho who is not gay and never has been gay. He is best known for his hardcore theocratic bent and for pleading guilty to "lewd conduct" in an airport restroom.[1][2] He is totally not gay.

On June 15, 1989, Craig co-sponsored the Community Life Amendment in the US Senate which would amend the constitution to "allow voluntary prayer and the teaching of the Judeo-Christian ethic in public schools."[3]

The amendment had four wide-reaching prongs:

He is not gay. 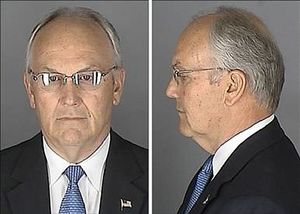 Mug shot after Arrest in June of 2007. Does this look like a gay man to you?

On August 8th, 2007 Craig plead guilty to disorderly conduct charges. Craig was arrested June 11 by a plainclothes officer investigating complaints of lewd conduct in a men's restroom at the airport.[2] Not gay.

He has attempted several methods to try and "make it go away" including filing to withdraw his guilty plea[4] and failing at both the Minnesota district court[5] and Minnesota appellate court[6] also resulting in four more gay men independently coming forward with allegations of previous encounters with him.[7] Now, he is claiming various forms of confusion and stupidity as a retroactive defense against his plea. He also said that he would never trawl for men in Boise. Why bust on Boise, dude? One is left to wonder why he didn't simply beat the rap, if it was so insubstantial. Especially as he isn't gay.

Senator Craig alleges, in his recent attempts to minimize the exposure of the errors of his ways, that when using the toilet in a sitting position, he takes a very "wide stance."[8] Eeeew. (Even for an instant cliche.)

Apparently he also does not flush or wash his hands (as a gay man always would), either, perhaps because the police officer had, by then, placed him neatly into a pair of handcuffs.