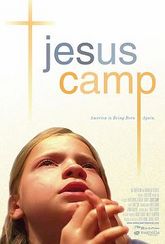 Praying I don't have to watch this film

Jesus Camp is a horror movie documentary about children in the Christian Evangelical movement, and centers around scenes from the life of Becky Fischer, the organizer of "Kids On Fire School of Ministry" summer camp (the name actually makes it sound less scary), as well as a handful of children who attend the camp itself.

The film highlights serious indoctrination of children using many of the same tactics of more traditional exploitative cults such as Scientology. Towards the end of the film, Fischer has the brass balls to claim that her camp isn't promoting a political position, but apparently she sees nothing wrong with wheeling out a life size idol standee of George W. Bush and encouraging the children to worship it while kneeling in front of it, touching the cardboard cut-out President in a moment of unintentional irony. During the camp, the children are also subjected to at least two different lectures on the subject of the evils of abortion by televangelist Lou Engle, whose eccentric preaching style of rocking his body back and forth can creep out adults, let alone children. These children are too young to understand sexual reproduction, let alone the reasons why a woman might choose to have an abortion and the ethical considerations surrounding it.

Themes of the film[edit]

The activities depicted in the documentary are repetitive, as would be expected when portraying indoctrination, and there are a number of recurring messages given to the children.

No favor is too small to ask of God[edit]

The bizarre and superstitious behavior of evangelicals features heavily in the film, but it's most clearly demonstrated by the seemingly trivial prayers offered by young and old alike. During a trip to a bowling alley, a small girl is seen asking Jesus to guide her bowling ball. Jesus perhaps has more important things to do, as indicated by the resulting gutterball. In another scene, Fischer and her acolytes, while setting up for the opening day of the camp, appear to perform some kind of exorcism on their electronic equipment. Fischer's prayers includes the incantation: "...and please protect our PowerPoint presentation. Satan, I know how you just love to get in our PowerPoint presentations and mess us up. Get out! You have no power over us here."

The idea that Satan would play pranks on Christians by uninstalling fonts or disabling video drivers is consistent with the Jack Chick worldview, in which angels and demons play petty games with mortals - very much in the style of the Olympian gods[note 1] and the Book of Job. There is at least some familiarity with Chick's work, since the holy bowling ball girl is seen reading a Chick Tract during a break in bowling. Some evidence exists that suggests it is only members of Dominionist organizations who play games with people's lives rather than actual spiritual beings.[1]

Fischer frequently trades on spiritual warfare themes and makes references to martyrdom, and asks that people be ready to die for Jesus. During a dance routine, the boys were dressed in combat fatigues and made-up in camouflage paint.

The Muslims do it, and so should we[edit]

Fischer early in the film talked about how Islamic children are raised - with thorough indoctrination and given hand grenades to play with. Fischer's only objection to this is that they are being indoctrinated with the "wrong" religion, and indeed adopts a rather unusual approach to combatting this. Her view is that Christian children must also be thoroughly drilled in the tenets of her brand of Christianity. When questioned on this indoctrination, she replied "Every other religion is indoctrinating their kids, hellooo. I'd like to see more churches indoctrinating." Perhaps a bit like fighting fire with fire, whilst in a house built of fireworks and petrol.

The children are regularly encouraged to speak in tongues, and the adults cheerily join in. It sounds like a bad actor who's been hired to play the role of an Arab or an Israeli, but has no idea how to speak the language. The result is vaguely foreign-sounding gibberish.

Holy bowling ball girl is twice seen proselytizing to strangers. During the bowling scene she wandered up to a woman to pass on the message that God was watching over her. There wasn't much of a reaction from the woman, so presumably she is used to God communicating with her through creepy kids. At the end of the film, the same girl is seen approaching another stranger to ask them if they knew where they were going after death. Although it's difficult to believe that adults would seek theological advice from random children, Ted Haggard had advised earlier in the film that children should use their "cute" factor to spread the word.[note 2] The children had at least one nominated "child pastor", a boy named Levi, who was fortunate enough to meet Ted Haggard (prior to revelations about his drug-fueled exploits with male prostitutes).

If there's one thing in the documentary that at least partially restores our faith in the rationality of humankind, and perhaps alleviates our despair, it is a single scene half-way through the film. A young child addresses the congregation saying:

I just wanted to talk about belief in God. I've had a hard time doing it and it's just really hard to do this. Just to believe in God is really hard, because you don't see him, you don't really know him much. Sometimes I don't even believe what the Bible says... It makes me feel guilty and bad.

...to accompanying squirms of discomfort amongst the faithful there present. Bravo, kid! But never feel guilty for questioning the idiocy you're being force-fed. If one child can resist the brainwashing, then maybe there's hope for the others brought up in this environment. The trouble is once he admitted his doubts the adults stepped up the brainwashing and made him feel even worse.

These select quotes should give an indication of what the film contains. It reads like a FSTDT best-of.

Ted Haggard features in the film as the pastor of the New Life Church in Colorado Springs, which the children from the camp visited. Shortly before the film's official release, he accused the film-makers of having an "agenda" and portraying the protagonists of the film as "sinister". The makers posted a response to this on their website, pointing out, amongst other things, that Haggard was the only person in the film who had a problem, and that everyone else involved, "feel it is accurate and fair and are excited about people seeing it."[2]

In an amusing-but-disturbing sermon, we see Ted Haggard rant against the evils of homosexuality. Haggard, of course, was a closeted homosexual himself who despite proclaiming the joys of lots of sex, presumably with his wife,[3] actually enjoyed trysts with homosexual prostitutes and recreational hard drugs,[4] thereby continuing the rich tradition of evangelicals with major sexual hangups.[5]

On the DVD, there is an extended deleted scene in which Haggard jibes the English cameraman who is filming his sermon at the New Life Church. While hamming it up in front of the camera, Haggard discovers the man's Catholicism, and turns to mocking the Catholic Church, the Pope, priests, and their forms of worship, encouraging his audience to laugh at the church with him. Ah yes, ecumenicism is a lovely thing.

The film received polarized reviews. Positive reviews tended to come from those who praised the candid insights into the world of fundamentalist indoctrination, while the negative critical reviews focused on the fairly low production values by comparison to most documentary films of the last ten years. The Wall Street Journal review by Joe Morgenstern called it "a snapshot, to be sure, but scattershot as well".[7]

Negative reviews also came from the fundamentalists who didn't like how the camp was portrayed in the film. In late 2006, vandals targeted the camp itself, causing it to be closed down. The camp's owners attributed the attacks to be a direct result of the film itself. Many Christian commentators seemed impressed with the film, or at least impressed the actual aims and methods of the Families on Fire Summer Camp. These supporters placed great praise on the camp's leader, Becky, for how she masterfully brainwashed brought up those kids as they should.[6]