Lojban (pronounced like "lozh-bahn"; IPA [ˈloʒban]) is a multipurpose constructed language based around formal/symbolic logic to completely remove ambiguity in syntax.

Initially designed in an effort led by Dr. James Cooke Brown as Loglan (logical language), it was thought up to test the Sapir-Whorf hypothesis, which basically says that the language that a person speaks determines the way the person thinks. The idea was to attempt to create a language so different from natural languages that its speakers would have to think differently. Think Newspeak, only without the dystopian nightmare to go with it.

Loglan further developed into Lojban, an improved version of it, which has now a significant internet community. The most prominent and unique feature of the Loglan family of languages is that they are designed to have the most unambiguous possible syntax. Additionally, the grammar is based on predicate logic.

Dr. Brown began work on Loglan in 1955, and announced the project in Scientific American in 1960. After completing the first version of the grammar and publishing the first dictionary, he set up The Loglan Institute (TLI), which oversaw further development of the language. One problem with attempting to create a completely unambiguous language is that it requires a certain degree of perfectionism. Loglan suffered set-backs, often substantial ones, whenever computer-aided analysis discovered potential flaws in the language, necessitating a reformulation of the grammar.

In the early 1980s there was a great deal of internal conflict in TLI, largely between Brown (who regarded Loglan as a research project based on his own intellectual property) and other prominent Loglan speakers (who concentrated more on broadening the community of Loglan speakers). As a result, many TLI members apparently lost interest, particularly given that the revised grammar and vocabulary hadn't even been properly released. When some Loglan enthusiasts attempted to correct this by promoting the revised language, Brown proceeded to assert copyright over most of the vocabulary, which was apparently a logical way of spreading its use.

In response to these copyright claims, a new revision of Loglan was invented, with a new public-domain vocabulary, and The Logical Language Group (LLG) was established to promote and shepherd this offshoot. At one point the LLG won a court case against Brown over the right to call the new language "Loglan", a name which the LLG asserts can refer to any language in the family. However, in practice the offshoot's grammar is largely explained using words from the language itself, and so the language is almost always referred to as "Lojban"[1] rather than "Loglan". Lojban's basic vocabulary and grammar were largely completed in 1993, although LLG committees continue to tweak some features and definitions. In addition, the vocabulary continues to grow with the invention and import of new words and phrases.

Loglan and TLI continue to exist, but have a dwindling community, and have not made much noise since the death of Dr. Brown in 2000.

The history of Loglan may be instructive with regard to constructed languages and the formation of new cultural communities generally. While James Cooke Brown was clearly the mastermind behind Loglan for the first few decades of its existence, the continued growth of the project seems to have required him to lose "ownership" over the language. Similarly, the future of Lojban may depend heavily on the success of the LLG at building and responding to a community much larger than itself. 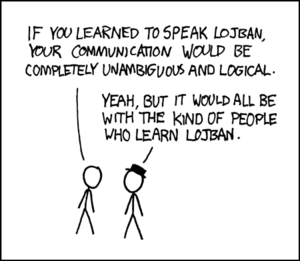 Lojbanists consider this one of their most ringing endorsements. 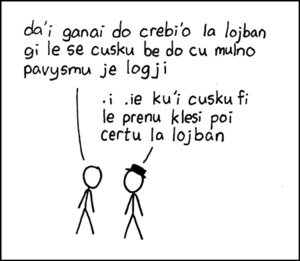 The same dialogue in Lojban.

Loglan has claimed many advantages over natural languages, particularly a lack of ambiguity, a grammar that can be easily parsed by computers, and a supposedly high degree of cultural neutrality (the vocabulary having been created by combining words from many different languages from around the world). It has also been proposed as a sort of official language of legalese, since it could presumably make legal documents unambiguous (unless they were really really vague).

Various Loglanists[Who?] have also expressed the hope (due to the Sapir-Whorf Hypothesis) that Lojban could eliminate certain types of logical fallacy and fuzzy thinking (the idea being that equivocation is not possible in an unambiguous language).[citation needed]

With that said, even Lojban has maintained at most several hundred community members, many of which may have only a moderate amount of proficiency and dedication regarding the language. Perhaps more damning, although Lojban is attempting to gain international support, most Lojban materials are either in English, Russian or in Lojban itself, making it more difficult for non-English-speakers to learn the language. Even more more damning, it's difficult to become fluent in a language with no native speakers and no possibility for immersion. Of course, that still didn't stop Klingon. Or Python for that matter.

It is considered impossible to have a semantically unambiguous language; even a race of emotionless, logic-obsessed Vulcans would presumably misunderstand each other from time to time. Rather, Lojban aims for unambiguous syntax. Some consequences of this are: audio-visual isomorphism - Phonetic spelling, punctuation incorporated into speech; obvious word endings to remove potential homophones and homonyms; strict rules on pronunciation of foreign words; and a host of grammatical words (cmavo) to express the roles of other words, create tenses, introduce relative clauses, and comment on sentences.

Lojban attempts to separate the emotional or metaphorical content of sentences from their literal meaning. To do this, it introduces whole classes of words that are used solely to comment on sentences, or specific words within them. As a result, there are words for "this is a figurative statement" (pe'a), "this is funny" (zo'o), and "this makes me happy" (.ui).

There's a certain naive idealism about this system; often this sort of information is not conveyed at all through English words (it comes from context, nonverbal cues, and tone of voice). It can often feel unnatural to declare this context out loud.[2] That said, there's a certain entertainment value in a language that tells you to exclaim "Wee!" every time something pleases you and "Oi!" when you're hurt.

Smileys and emotional abbreviations (like ":-)" or "ROFL") are unnecessary in Lojban chat. Instead of 8===D~, one simply says ".uosai ro'u".

Although the precise number of Lojbanists is unknown, it is almost certainly much smaller than that of Esperanto, the largest conlang, with lower numbers achieving fluency, due partly to the difficulty of the language. It tends to be limited to the internet, with very few physical conventions or institutions, and has not produced a substantial literature. Don't expect to be reading Sherlock Holmes in Lojban any time soon.

Lojban may aim to be logical, but the evidence suggests that its users are as passionate and illogical as any other Joe Schmoe. As with many idealistic movements, it has taken on some of the features of a quasi-religion, including schisms and disputes. The most notable schism was between Loglan and Lojban, but there have been others. Esperanto has had similar problems in the past, but has been able to surmount them, partly because it has built up a user base of thousands of people.

Compared to other conlangs, the idea behind Lojban is creative and original. It likely accomplishes its promises of being logical and culturally neutral (or, at least, not Eurocentric like Esperanto, Volapük, etc.). But the Lojban community is still tiny and with no apparent growth, and Lojban learning material is not multilingual enough. A proper analysis would require that Lojban have a larger number of speakers, and consequently a more developed culture.