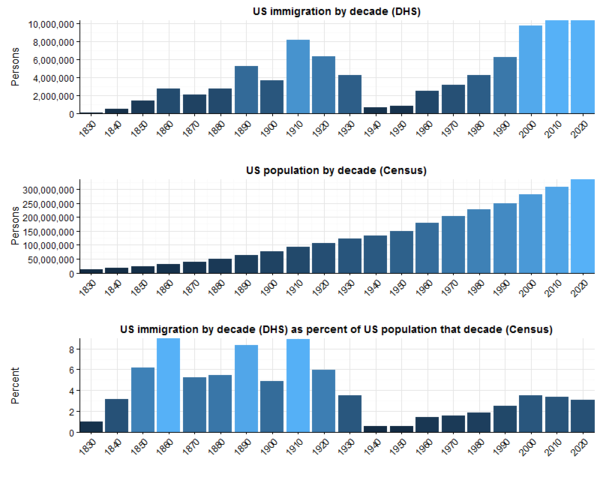 Ther makin' us all less white!

Of course the question is even if there is "mass immigration" on an "unprecedented scale" (which clearly, there isn't) the question whether this is actually a bad thing has to be asked. Judging by all the O'Reillys and DiLorenzos who make those arguments today, immigration in the past certainly has not destroyed America's most enduring characteristic: Immigrants bitching about the people on the next boat arriving in the harbor.

See the main article on this topic: Intersectionality

Opposition to mass immigration is something that apparently every right-winger can get behind.

The bitter irony is that the only way a mass migration — as spoken of by fear-mongers — could happen is because of another thing many wingnuts deny… a thing called climate change. Climate change — via such delights as desertification[50] and water shortages[51] — is slowly but increasingly costing some of the poorest nations their inhabitability,[52] and will likely cause multiple global exoduses unseen in human history as it begins to affect countries rich and poor. Another issue is that many of these countries, such as Syria, are already so war-torn that their governments can do very little to stop emigration. By the time climate refugees[53] reach the US (itself desertification-prone[54]) and southern Europe, the exodus may be so huge that the host nations actually may have difficulty supporting it (even without taking over Greenland). The deserted countries would probably have their Mad Max-style dystopian remains conquered by extremist groups such as the Taliban and ISIS, with virtually no governing bodies to stop them.