"Too many OB-GYNs aren't able to practice their love with women all across this country." —GW Bush Sept. 6, 2004, in front of a photoshopped background.

Cunt, referring to female genitalia, is one of the most taboo four-letter words in the English language. This is because it is considered offensive both by religious prudes and feminist prudes, which means very few people can safely say it without offending someone in their business or social circles.

As perhaps the most powerful force in the universe it has many other names.[1] 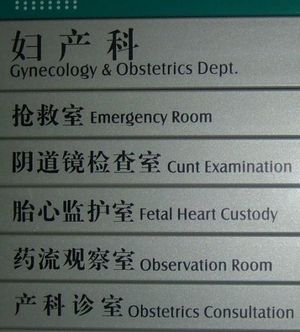 The word is seldom encountered in clinical settings, but there are apparently exceptions.

The vagina is a wonderful place from which most of us came,[note 1] and where many of us try to return to as often as possible. The word vagina simply means "sheath" in Latin, and it has been in use in English for more than three centuries.[2] "Cunt," by comparison, is a legitimate non-slang word with an extremely long history. The earliest known usages were as place names, e.g. Cuntelowe, Warwickshire in 1221 and Gropecuntelane, Oxford and London in 1230)[3] Gropecuntelane was where the brothels were located.[4] Nice! The Middle English word "quentye" had several homonymous meanings including 'pleasing-thing' and 'clever'.[5] From this root we also derive the word 'quaint'.

'Cunt' has several cognates in other languages:[3]

Ultimately, it derives from the Proto-Indo-European stem *gwen-, meaning "woman" (giving it the literal meaning of "womanly bits" and thus cognate with such words as "gynecologist" and "banshee"). The word also has resemblances to "cunabula," a cradle and "cunicle," an obsolete word for a passage. The Romans extended the use of "cunnus" to mean whore in much the same way that English speakers used "cunt" as a pejorative term for "woman", as well as for a woman's anatomical parts.[7] This usage has now evolved into an abusive derogatory term which has given "cunt" an entirely new meaning,[8] particularly when applied to men as well as women.

Cunt is used — particularly by non–American English speakers — in a wide variety of situations, as well as in the more traditional usage in reference to the pudenda. Beginning with the most traditional use, examples include:

Excluding words expressing bigotry, it is widely considered to be the most offensive word in English (at least in the US[9] and UK[10]), above the likes of "motherfucker" and "fuck,"[note 3] but its use and the public exposure to such language has degraded what such a prominent position means. One indication of the shock value of the word is the Scunthorpe problem,

in which AOL blocked residents from Scunthorpe, England from creating accounts in 1996.[11]

Mark Lawson, writing in The Guardian (Feb 5, 2004), contends that the word has now lost its power to shock, at least in England.[12] This was following an outburst from punk icon John Lydon (one time member of the Sex Pistols), who, at 10:30 p.m. on February 4th 2004, during a mainstream live British television transmission of "I'm A Celebrity, Get Me Out Of Here!" (a reality show in which failing celebrities degrade themselves for tabloid attention) accused the voting audience at home of being "fucking cunts" for failing to choose him as that night's loser. Fewer than 100 complaints were received by ITV1 (the broadcaster) and Ofcom (the regulatory authority) combined — contrasted with the many thousands that complained about the blasphemy contained in Jerry Springer: The Opera at around the same time. However, swearing of any kind still generates steady complaints before the "watershed" time of 9:00 PM. Australians continue to use the word as a sort of hyphen.[13]

Come love, and dwell with me
Under the greenwood tree,
None can more happy be,
Than I shall be if blessed with thee!