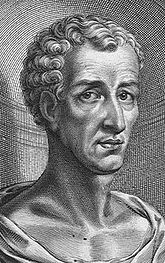 Lucian was a bit skinny but definitely sexy... or at least that's what some engraver imagined more than 1,500 years after he died.

Lucian of Samosata, generally just Lucian, (ca. 125 – after 180 CE) was a rhetorician and satirist with 70 known surviving works. He is best known for his dialogues ridiculing Greek mythology and philosophy.

Lucian's most famous work is A True Story

, a satire against tall tales, containing space travel, aliens, and interplanetary war. It's regarded by many as the first known work of science fiction. Another fun work he wrote is The Lover of Lies

, a dialogue making fun of belief in the supernatural. It starts out with a skeptic named Tychiades who gets in an argument with some friends about alternative medicine and then they start telling him bat-crazy stories involving statues that come to life, haunted houses, and a whole host of other nonsense, culminating with the famous story of "The Sorcerer's Apprentice." He also wrote a bunch of work making fun of traditional Greek religious beliefs including Dialogues of the Gods, Zeus the Opera Star (no, really), and The Parliament of the Gods.

Several apologists, looking for evidence for the existence of Jesus, have cited the following statement by Lucian (ca. 170 CE), recounting the words of a speaker in a town square after a man named Proteus had thrown himself into a fire:[1]

It was then that he [Proteus] learned the wondrous lore of the Christians, by associating with their priests and scribes in Palestine. And—how else could it be?—in a trice he [Proteus] made them all look like children, for he was prophet, cult-leader, head of the synagogue, and everything, all by himself. He interpreted and explained some of their books and even composed many, and they revered him as a god, made use of him as a lawgiver, and set him down as a protector, next after that other, to be sure, whom11[note 1] they still worship, the man who was crucified in Palestine because he introduced this new cult into the world. Then at length Proteus was apprehended for this and thrown into prison[.] [...] [T]he Christians, regarding the incident as a calamity, left nothing undone in the effort to rescue him[.] [....] So it was then in the case of Peregrinus; much money came to him from them by reason of his imprisonment, and he procured not a little revenue from it. The poor wretches have convinced themselves, first and foremost, that they are going to be immortal and live for all time, in consequence of which they despise death and even willingly give themselves into custody; most of them. Furthermore, their first lawgiver12[note 2] persuaded them that they are all brothers of one another after they have transgressed once, for all by denying the Greek gods and by worshipping that crucified sophist himself and living under his laws. Therefore they despise all things indiscriminately and consider them common property, receiving such doctrines traditionally without any definite evidence. So if any charlatan and trickster, able to profit by occasions, comes among them, he quickly acquires sudden wealth by imposing upon simple folk.

Lucian, while a satirist, separated fiction from fact.[2] Lucian also attempted to act as an unbiased,[3] serious, and accurate historian.[4] While his depiction of the incident may be humorous, it was likely not fictional.

There are several issues with taking this as evidence of a historical Jesus.[5]