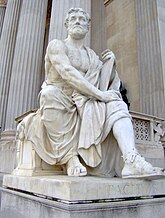 He was a beautiful butch guy. Maybe.

Publius Cornelius Tacitus, also Gaius Cornelius Tacitus, generally just Tacitus,[note 1] (ca. 55–117 CE) was a Roman historian and senator. Tacitus gives a brief mention of a "Chrstus" in his Annals, which Christians have interpreted as authoritative proof that a divine Jesus existed. He was also good friends with Pliny the Younger, with whom he exchanged many a letter.[1]

He gives a brief mention of a "Chrstus" in his Annals (Book XV, Sec. 44), which he wrote around 109 CE. He gives no source for his material. He says:

Even assuming the passage is totally genuine, two fires had destroyed much in the way of official documents Tacitus had to work with and it is unlikely that he would sift through what he did have to find the record of an obscure crucifixion which suggests that Tacitus was repeating an urban myth whose source was likely the Christians themselves,[3]:344 especially since Tacitus was writing at a time when at least the three synoptic gospels are thought to already have been in circulation.

There is much to question the provenance and veracity of Annals 15.44.[4] There is no other historical confirmation that Nero persecuted Christians for the burning of Rome. Josephus[5] and Pliny the Elder - who were both in Rome in 64 CE - didn't mention Christians at all, which seems unlikely if Nero had been blaming them for the fire. Seneca the Younger's lost On Superstition also didn't mention Christianity, according to Augustine in the 4th century. Furthermore, Neither Origen nor Tertullian use this passage despite referring to or citing Tacitus elsewhere.[6]

Christian works in the three centuries after Tacitus do not mention that Nero persecuted Christians for the burning of Rome. The apocryphal Acts of Paul (c.160 CE), which has Nero burning Christians to death around the time of the death of Paul (i.e., 64 or 67 CE) because Nero had seen some guy named Patroclus who had supposedly died, and had been told this man was now a solder in Jesus' army seeking to "overthrow all kingdoms" (i.e., the authors of Acts of Paul have Nero reacting to a possible attempt at overthrowing his government). The Acts of Peter (late 2nd century CE) says Nero considered destroying "all those brethren who had been made disciples by Peter", but was told in a dream after Peter's death (either 64 or 67 CE) 'you cannot now persecute or destroy the servants of Christ', so a frightened Nero 'kept away from the disciples ... and thereafter the brethren kept together with one accord ..'

So, not only are there no contemporaneous accounts of Nero's persecution of Christians for the burning of Rome, but early Christians themselves do not appear to be aware of it and give two wildly contradictory accounts — either Nero killed Christians along with Paul some three years after the fire because he was told this cult would "overthrow all kingdoms"; or he had a dream resulting in him leaving them alone, and that could have been as early as AD 64, the year of the fire.

It isn't until Sulpicius Severus c. 400 CE that there is mention of Nero persecuting Christians for the burning of Rome (there are references to Nero persecuting or punishing Christians in works of Suetonius (Nero 16), Melito, Tertullian and Lactantius but not for the burning of Rome). A passage in Sulpicius' Chronicle [of Sacred History] is ironically similar to Annals 15.44, but without the overt anti-Christian rhetoric. Arthur Drews proposed that, rather than Sulpicius Severus getting the information from Tacitus's Annals, the Annals passage was doctored after Sulpicius Severus had written his Chronicle[7] (it could have been done at the same time).

Further compounding matters is whether a non-Christian historian would refer to a sect founder as 'Christ' rather than a more secular name such as Jesus [of Nazareth]. A Christian scribe, however, would have no issue in calling him Christ. "The difference in pronunciation between Chrestus and Christus was very slight, and the latter, 'the anointed one,' "would mean nothing to a pagan Gentile"[8] The use of Christus ('the anointed one,') is at odds with the group of followers or supporters called Chrestianos/Chrestianoi ('the good men'): it is a non sequitur.

Even Remsburg, who in 1909 felt there was enough to 'support' the existence of a historical Jesus, wrote:

This passage, accepted as authentic by many, must be declared doubtful, if not spurious, for the following reasons:

Many who accept the authenticity of this section of the "Annals" believe that the sentence which declares that Christ was punished in the reign of Pontius Pilate, and which I have italicized, is an interpolation.[9]

Raphael Lataster has pointed out several other problems with the passage e.g., in a paper in Intermountain West Journal of Religious Studies,[6] titled "Questioning the Plausibility of Jesus Ahistoricity Theories—A Brief Pseudo-Bayesian Metacritique of the Sources",

The passage is therefore suspect as evidence for early Christianity. Richard Carrier, in a 2014 paper, "The Prospect of a Christian Interpolation in Tacitus, Annals 15.44" Vigiliae Christianae, Volume 68, Issue 3, pages 264 – 283, (and in an earlier, more-detailed version in Hitler Homer Bible Christ), outlined good evidence that the passage is an interpolation.

Furthermore in the 1899 revised Reader's Handbook by E. Cobham Brewer

Annals of Tacitus (The). Said to be a forgery of Poggio Bracciolini, apostolic to eight popes (1381--1459). It is said that Cosmo de Medici agreed to pay him 500 gold sequins (about £160) for his trouble. We are further told that Poggio's MS. is still in the library of Florence, and that it was published in 1460. Johannes de Spire produced the last six books, but the work is still incomplete. In confirmation of this tale it is added "that no writer has quoted from the Annals before the close of the sixteenth century." The title "Annals of Tacitus" was given to Poggio's book by Beatus Rhenanus in 1553.[10]

And, if that isn't enough, we have proof that the earliest extant copy of Tacitus has been tampered with. There are also issues with the provenance of all of Annals.

The surviving copies of Tacitus' works derive from two principal manuscripts, known as the Medicean manuscripts, which are held in the Laurentian Library in Florence, Italy, and written in Latin. The second Medicean manuscript is the oldest surviving copy of the passage describing "Christians." In this manuscript, the first 'i' of the Christianos is quite distinct in appearance from the second, looking somewhat smudged, and lacking the long tail of the second 'i'; additionally, there is a large gap between the first 'i' and the subsequent 'long s'. Latin scholar Georg Andresen was one of the first to comment on the appearance of the first 'i' and subsequent gap, suggesting in 1902 that the text had been altered, and an 'e' had originally been in the text, rather than this 'i'.

In 1950, at historian Harald Fuchs' request, Dr. Teresa Lodi, the director of the Laurentian Library, examined the features of this item of the manuscript; she concluded that there are still signs of an 'e' being erased, by removal of the upper and lower horizontal portions, and distortion of the remainder into an 'i'. In 2008, Dr. Ida Giovanna Rao, the new head of the Laurentian Library's manuscript office, repeated Lodi's study, and concluded that it is likely that the 'i' is a correction of some earlier character (like an e), the change being made an extremely subtle one. Later the same year, it was discovered that under ultraviolet light, an 'e' is clearly visible in the space, meaning that the passage must originally have referred to chrestianos, a Latinized Greek word which could be interpreted as the good, after the Greek word χρηστός (chrestos), meaning "good, useful", rather than strictly a follower of "Christ".

Other evidence of tampering exists regarding the removal of the entire Annals section covering 29-31 CE; “That the cut is so precise and covers precisely those two years is too improbable to posit as a chance coincidence.”[3]:303

Also, it has been noted there is a strange temporal jump in this part of the Annals in that it goes back from the time of Nero to the time of Tiberius and returns back to Nero again. As noted "Tacitus would have had to explain more about the suppression of the new superstition if it died out in the 30’s and started again in Rome around in the 60’s (the Fire was in 64). If the outbreak of the superstition happened in the time of Nero, as Josephus reports, there would be no need to explain what happened."[11] Based on this temporal jumping it has been suggested that the Tacitus passage originally said:

Given that our oldest copy is from the 11th century, and not a single person indicates knowledge of Annals 15.44 before it was first referenced in the 14th century, there is justification to suspect Christians tinkered with it.

Tacitus also wrote the Germania and the Agricola, which are invaluable pieces of ancient ethnography, and some of the few sources we have about the lives of the Germans and Britons in the second century. The Germania is one of the classical sources of the noble savage myth, since Tacitus repeatedly praises the Germans for their morality, and holds them superior to his Roman contemporaries in personal virtue.

Tacitus was born around 55 CE, or 22 years after the supposed crucifixion.