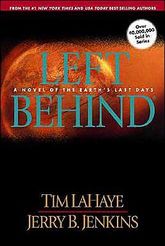 Were you looking for the educational scheme No Child Left Behind?

The Left Behind franchise centers around a series of banal (yet wildly popular) run-of-the-mill Christian apocalyptic novels, co-authored by the evangelical minister Timothy LaHaye and by the writer Jerry Jenkins

. The series attempts to portray the end times from a premillennialist dispensationalist perspective; the name Left Behind refers to the billions of non-Christians who will summarily be refused a golden ticket to heaven when the rapture occurs.[Note 1]

Despite being universally panned by critics, the Left Behind franchise has somehow grown into a commercial success, starting with the launch of the first book in 1995, and has since spawned a series of children's novels,[Note 2] a series of prequel- and sequel-books, four movies and four computer games - all of them ceaselessly odd. In total, the series has sold about 80 million copies, according to its publisher.[1]

The books are arguably among the worst novels ever written.[citation NOT needed] Despite this, the series has served to line the authors' pockets with the cash of other Christians, who are apparently willing to pay top dollar for any Rapture-based fluff.

The primary premise of the novels is that if all 1.5 billion Christians literally corporeally vanished completely in a single instant from the face of the Earth, people would still not believe in Christianity. It has been suggested that such an event would push even Dawkins to at least a 4 on the atheism scale.[2] It's a widely known "fact" among Christian circles that atheists "just hate God" rather than "require convincing evidence of a deity" which is why even a rapture wouldn't convince them.[3]

The premise of the series has been noted to be extremely similar to the novel 1970 novel 666 by Salem Kirban. Some of the characters in Left Behind, such as Buck Williams the journalist, also have corresponding predecessors in 666.[4] The main antagonist Nicolae Carpathia (i.e. the Antichrist) in turn is a very thinly veiled spoof/ripoff of the infamous Romanian dictator Nicolae Ceauşescu, as both are Romanian politicians of short stature with large egos (although Ceauşescu's positions on abortion weren't far from that of most Left Behind fans).

Until Left Behind was published, the longest, most overblown, and worst "this is fiction but it REALLY ISN'T – this is really our world on the brink!" series ever written was L. Ron Hubbard's Mission Earth series. However, Christian End Times ranters were appalled at the thought that they could be outdone by Scientology, and so Timothy LaHaye teamed up with an actual author, Jerry Jenkins, to churn out an even BIGGER, LONGER, MORE BORING and FAR MORE UNBELIEVABLE series that seemed to drag on forever without ending. This, of course, made the series a super best-seller. It sold millions of copies worldwide.

Over at Conservapedia, the entry for the Left Behind series states, "As is common with Christian works that become successful, it [Left Behind] was given poor reviews by many critics for its Christian-specific themes instead of being more generic and all inclusive, a standard that is seldom applied to non-Christian works." [5] In other words, the work was panned because Christians Are Always Being Persecuted.

The Left Behind series includes three films. Kirk Cameron is the lead actor in the series - which says everything you need to know, really. The entire idea behind the films was parodied in The Simpsons when Homer watched an apocalyptic movie called Left Below - you know, people will have watched that episode thinking "what a shit movie, I'm glad they don't make stuff like that in real life". Grace Hill Media was the PR firm behind the movies. The highlight of the whole series however is Gordon Currie as the Antichrist. Between the hammy scenery chewing and hilariously bad Romanian accent you will be unable to keep a straight face whenever he's on screen.

Left Behind - The Movie was released in October 2000 featuring the amazing actor Kirk Cameron and a script written by Paul Lalonde, who spent the 80s fighting against the evils of children's cartoons.[6] It was almost universally panned, with only 14% Fresh reviews at RottenTomatoes, and 15% Fresh from the Cream of the Crop.[7] During the airplane scene, the entire flight crew is raptured: what are the odds of that? This is likely based around an urban legend that airlines won't allow Christian or evangelical pilots in case such a situation happens for real. Also, look for a corpulent, bespectacled, balding white guy - that's John Hagee in a cameo.

The second film was released direct to DVD in 2002. It was generally ignored; only 2 ratings of 6 on RottenTomatoes were Fresh.[8] The second movie focuses on what happens after the Rapture, and the rise of a so-called antichrist, who just so happens to be head of the most hated organization in the right-wing fundie world: the United Nations.

It also features a conversion via Pascal's Wager.

Left Behind: World at War[edit]

The third film was released on DVD on October 25, 2005 after being given premieres in Churches - an interesting way of avoiding the "direct-to-video" smear, at least. The movie is based on the last two chapters (50 pages or so) of the novel Tribulation Force and gets even weirder than the previous films. It was given even less attention than the second; only two reviews are listed on RottenTomatoes.[9] 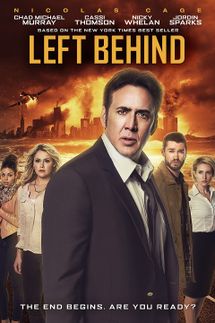 Oh, come on, you knew this was coming. This is Hollywood we're talking about here. Their real politics are all about the almighty dollar. If they see a source of money, even if that source is a bunch of fundamentalist kooks, they're gonna go for it. So of course, they rebooted Left Behind.[10] The star? None other than Nicolas Cage. Why? It's Nicolas freakin' Cage; is there any role that one would be genuinely surprised at him taking at this point?[11][Note 3]

The remake was released on October 3, 2014, and the reception seems to be: mother of God does this suck.[12] It currently "enjoys" a 2% Tomatometer, with the Rotten Tomatoes critics' consensus reading "Yea verily, like unto a plague of locusts, Left Behind hath begat a further scourge of devastation upon Nicolas Cage's once-proud filmography."[13] They somehow made a movie even worse than the original. Here's how bad it is: they make a movie about the end of the world, starring Nicolas Cage, and they cast him in the role of the sane one.

Sadly, Cage failed to win a Razzie for Worst Actor, because Kirk Cameron was in a non-Left Behind movie that year.

In contrast to the originals, fundies hated the reboot almost as much as normal people. While the first movie allegedly converted Christians of different flavors of wingnuttery to premillennial dispensationalism, the reboot got laughed or booed out of nondenominational churches. The fact that it didn't have a cast and crew of real Christians didn't help endear it to the wingnut demographic either. Not to mention that, in contrast to the relatively faithful adaptation in the first movie, the reboot threw most of the story out to turn it into a generic disaster movie, so it's barely even wingnut in content. The only fundie who was happy with it was LaHaye himself—who'd hated the original trilogy. A cynic might suggest that this was because the producers raised less money than they promised for the first movie, which impacted LaHaye's share of the profits, which is why he started complaining about the movie before he'd even seen a rough cut, while for the reboot the producers (the same ones—he won the rights back from the, but couldn't find anyone else to sell them to…) raised a lot more. But that cynic would be ignoring the fact that a good Christian like Tim LaHaye would never be that petty, so the true reasons will be forever mysterious.

On November 7, 2006, Left Behind: Eternal Forces, a real-time military-simulation strategy game for PC, was released by Left Behind Games. The game received generally negative reviews, with an average rating of 45% on gamerankings.com.[14] The general concept of the game was relatively warmly received, but the majority of the criticisms came from the execution of that concept, including numerous bugs, badly coded AI, poor graphics and the tendency of the game to want to push religious pseudoscience down your throat and sell you religiously themed products.[15][16][17][18][19] One can play through the entire game without converting a single person and win by slaughtering civilian men, woman and children as well as peaceful, heavily-armed U.N. workers and peacekeepers who are simply trying to spread aid.[Note 4] There is a down side to the player killing innocents: It makes the Christians less powerful (or as the game puts it, it lowers their spirit meter). Never fear, players can encourage their team members by casting spirit blasts -- which are oddly like the healing spells case in "pagan" World of Warcraft -- or by subjecting the player's team to Christian rock (although, the Antichrist may attack with his heavy-metal musicians).[20] Three sequels were recently released, with effectively no hype or fanfare whatsoever, and seem to be simply more of the same with the latest including full-motion video clips. The Hutaree Christian terrorist group was found to have multiple copies of the original game in their possession.[21][22][23]

In a funny twist, the multiplayer let you play as the "Global Community" AKA The Armies of the Anti-Christ. In another funny twist, they were far and away overpowered compared to the Tribulation Force. (The unraptured Christians... what?)

Slacktivist (Fred Clark), a liberal evangelical blogger, became something of a minor hero by going through the whole book, page by page, and writing an exhaustive commentary on the theology, underlying ethics, and awful writing. He is presently up to the third book, Nicolae: The Rise of Antichrist, and his archive is not for the faint of heart or weak of stomach.

Other bloggers have taken up the slack: Mouse has completed liveblogging the kids' series, including Kingdom Come, at [2] and Comrade Dread has given his own take on the last book at [3]. On the Christian side, TheOldMaid discusses LB's authoritarian theology at [4].

In 2016 and 2017, 4chan held a play-by-post game ("quest") set in the Left Behind universe, specifically the last century of the Millennial Kingdom. It introduced genetic engineering, AI, and space exploration to a setting within which the cell phone is considered the pinnacle of swanky high technology (and whose authors would have likely considered all those newfangled inventions to be sacrilege). The quest snowballed, generating meta-fanfics and even its own wiki and | TvTropes page which helpfully links to the quest, the meta-fanfics, the relevant wiki pages, and the commentary.

The Left Behind wiki[edit]

The Left Behind Wiki is the wikia-based wiki dedicated to the book and movie series, touting itself as the "Only free to edit encyclopedia on the series". It has articles on locations, plots and characters—of which there are millions.

But the contributors don't rest on their laurels - they have chosen the Featured User of October 2009... still proudly displayed on the site as of January 19th, 2014. Oops.

The LB wiki is now being updated again, after having been linked to 4chan of all places, but most articles are now locked so that only one person can edit them. Interestingly, according to it Tim LaHaye is still alive, and there is no way to update that information.

What is going on at the Left Behind Wiki?[edit]

Just about nothing.[24] Their article on Tim LaHaye is also notably more stub than ours is.[25]