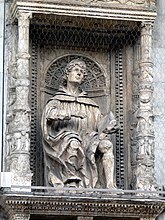 I can see your house from here.

Gaius Plinius Caecilius Secundus, born Gaius Caecilius or Gaius Caecilius Cilo, better known as Pliny the Younger or just Pliny (61–ca. 113 CE), was a Roman lawyer, author, and imperial magistrate under Trajan (reigned 98–117). Pliny wrote hundreds of letters, many of which still survive, that are of great historical value for the time period. Some are addressed to reigning emperors or to notables such as the historian Tacitus.

Pliny the Younger was a close friend of historian Suetonius.

In one letter from Pliny to Trajan (Letters 10.96-97), written ca. 112 CE, Pliny asked for advice on dealing with Christians and recounted a trial in which he prosecuted them:[1]

Christians ... asserted, however, that the sum and substance of their fault or error had been that they were accustomed to meet on a fixed day before dawn and sing responsively a hymn to Christ as [if] to a god, and to bind themselves by oath, not to some crime, but not to commit fraud, theft, or adultery, not falsify their trust, nor to refuse to return a trust when called upon to do so.

However, this reference is not even to Christ, but to Christians -- notice the absence of the name Jesus. This could have referred to any of the other "christs"[2] who were being followed by some Jews who thought they had found the messiah. Nor would the existence of Christians (of the Jesus cult variety) in Asia Minor in the early 2nd century CE be a particularly relevant piece of evidence for the historical existence of Jesus Christ, any more than the survival of the John Frum cult provides evidence of a historical John Frum.

Roman culture at that time had the concepts of numen ("divinity", "divine presence", or "divine will." depending on context) and genius loci (guardian spirit), and the Emperor was worshiped as both rather than as a deus (deity). The closest modern term is the Japanese kami and this means that the worship Pliny describes could have been to a deus (actually to a deity), a numen (on par with archangels and saints), or a genius loci (akin to a guardian angel)

Note that Pliny's hesitant phrase 'as if to a God' (quasi deo) could reflect his response to the exoteric myth (if his Christian informants were simply repeating the Gospels in which Jesus allegorically presented as a historical man) or the esoteric one (Jesus then being confusingly explained to him as a celestial archangel or demigod they pray to, but not exactly to 'God'). It could also be a textual corruption, as there is some external evidence Pliny may have originally written Christo et Deo, 'to Christ and God' or Christo ut Deo 'to Christ as God' See Doherty, Jesus: Neither God nor Man pg 640[3]

The idea of a possible textual corruption is demonstrated in Tertullian, whose refence to this passage says ad canendum Christo ut deo. It should be also be noted that the actual phrase quasi deo is sometimes translated as 'as to a God'[4] In fact, in 1885 Joseph Barber Lightfoot, in his rendering of the MSS which this passage comes from, admitted: "There can be no question about the reading even though the MSS have et deo..."[5] There is not only a possible textual corruption, but also an admitted translational corruption, forcing it to say what the apologists claim it says.

Pliny and Tacitus were close friends, corresponded with each other regularly, and were even governing adjacent provinces at the very time Pliny wrote his letter.[6] Thus, if Tacitus' reference to Christ (again, not Jesus) is indeed to the figure of the New Testament, Pliny, with his knowledge of what Christians believed, could well have been the source for Tacitus' brief mention of the execution of Christ. Thus, unlike what is often claimed by apologists, the source for Tacitus' Christ reference would not be traced to official Roman records and hence independent confirmation, but to Pliny, who was simply telling Tacitus what Christians believed. By the time of Pliny and Tacitus, the oldest gospel had almost certainly been in circulation for an entire generation, and some of the subsequent gospels might have been around for several decades.

So with Pliny we have translation issues, possible transcription issues, and the possibly Pliny misunderstood what the Christians and-or Tacitus was telling him. Even if ignore all that at best Pliny’s report is only of what other people believed. Even if this sentence does refer to a group who followed Jesus it is not particularly enlightening as no one denies that Christianity was in existence at that time. Pliny's report might be useful in documenting the religion, but not the historic Jesus.

There is a curious thing about Pliny's test to prove someone was not a Christian ("offered prayer with incense and wine to your image, which I had ordered to be brought for this purpose together with statues of the gods"[7]): Jews would also fail it.[8]

Therefore, either there were no Jews in the Bithynia-Pontus Province, or Romans were not making a distinction between Jews and Christians, for whatever reason.[9]

Moreover, if the Pontus referenced by Philo is part of the Bithynia-Pontus Province (it could refer instead to to the entire geographic area along the coast), then there had been Jews there.

Pliny had never legally investigated the Christians, and thus consulted Trajan. Neither Pliny nor Trajan mention the crime the Christians had committed, except for being Christian. Trajan's response makes it clear that being a Christian was sufficient for judicial action. Together, this shows that the Roman Empire, as a government, did not at the time "seek out" Christians for prosecution or persecution.