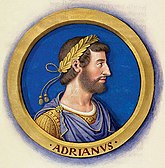 Hadrian in all his rosy-cheeked glory.

Hadrian, born Publius Aelius Hadrianus, (76—138 CE) was a Roman emperor from 117 to 138 CE. He conquered Britain, rebuilt the Pantheon and is regarded as one of the so-called "Five Good Emperors".

in Judaea — the last major concerted military effort by a Jewish armed force prior to the rise of Zionism.

Further, Hadrian, acting on the advice of his proconsul of Asia, Minucius Fundanus, decided that Christians wouldn't be killed without a trial.[1] He also took Antinous

, a young boy at the time, to be his lover until the latter's death at age 20.

Some Christians, seeking Evidence for the historical existence of Jesus Christ, have quoted Eusebius, quoting a letter from Hadrian to Minucius Fundanus:[2][3]

I do not wish, therefore, that the matter should be passed by without examination, so that these men may neither by harassed, nor opportunity of malicious proceedings be offered to informers. If, therefore, the provincials can clearly evince their charges against the Christians, so as to answer before the tribunal, let them pursue this course only, but not by mere petitions, and mere outcries against the Christians. For it is far more proper, if any one would bring an accusation, that you should examine it.

Interpreting this as evidence of Jesus' existence doesn't hold up, for several reasons:[4]

Beginning of the end of the empire?[edit]

The emperors Trajan and Hadrian are commonly cited as those who reigned over the Roman Empire at its greatest territorial extent. This means in reverse that Hadrian actually shrank the empire when he constructed his famous wall, as territory previously claimed and tenuously governed by Rome was now lost and would never be regained. Most of his contemporaries did not see the loss of a few acres of snow as a huge tragedy and the fact that Adriano/Adrian are still popular names both in Italy and his native Spain show that he is widely regarded more positively than - say - Nero.