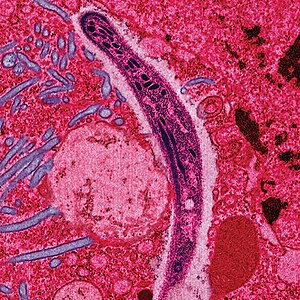 Malaria is a disease of the blood that can be fatal. It is caused by the eukaryotic protists Plasmodium spp. The protists are spread to humans most commonly through mosquitoes of the genus Anopheles

in tropical areas of Asia, Africa and North and South America. Less than one percent of those infected die from the disease, but more serious cases caused by P. falciparum are more lethal.

In addition to the acute effects of malaria, the International Agency for Research on Cancer has evaluated P. falciparum as probably carcinogenic to humans (Group 2A) in regions where it is endemic.[1] The evaluation is partly based upon strong evidence that P. falciparum reactivates Epstein–Barr virus, which is known to cause Burkitt lymphoma in humans.[1]

Malaria has, globally, more impact on economics and public health than almost any other infectious disease. The considerable effort invested by many organizations into developing a malaria vaccine, which would radically alter the health situations in affected countries while generating very little profit, is a convenient and effective foil to conspiracy theories surrounding Big Pharma.

The distribution of malaria in the Old World before malaria-eradication efforts.

Malaria has revealed numerous mutations in humans, that normally would have been either neutral or deleterious, but have become beneficial in areas where malaria is prevalent. Due to their benefits for populations in high-risk areas of malaria, these mutations have thrived. 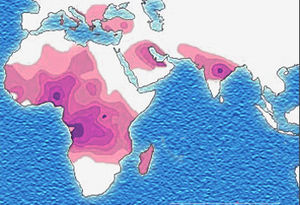 The distribution of sickle-cell disease in pre-modern times.

A single-point mutation in the gene that codes for hemoglobin-β causes a severe disease in humans called sickle-cell disease. The point mutation causes a single shift of amino acids, from the hydrophobic glutamate to hydrophilic valine, and creates a drastic shift in fold of the protein. Sickle-cell disease is lethal to those homozygous for the allele, while those heterozygous for sickle-cell have fewer issues that arise due to the disease. The allele causes a deformity in the red blood cells that greatly reduces malaria infections in those individuals.

Glucose-6-phosphate dehydrogenase is an enzyme which aids in the natural antioxidant protection of red blood cells. A mutation in the gene which codes for the protein G6PD causes hemolytic anemia, where red blood cells are more rapidly broken down and excreted from the body, thus new red blood cells must be produced quicker. This cycle causes an intolerable environment for malaria to develop, and thus reduces the infection rate for the disease.

The widespread use of chloroquine for decades against malaria, both as treatment and prophylaxis, has resulted in the evolution of strains of P. falciparum with novel mechanisms for preventing the drug from poisoning them. In certain countries these strains have become the common form of falciparum,[5] and since falciparum is among the more lethal plasmodium parasites, it has become necessary in places to transition to other antimalarial drugs, usually derivatives of artemisinin and other derivatives of quinine. Newer antimalarial formulations (generally those sold in the developing world to travelers) frequently combine multiple drugs[6] (e.g. Malarone, a preparation of atovaquone and proguanil)[7] in order to delay the evolution of resistance, much as GM corn varieties are being introduced which produce multiple natural insecticides to make resistance to any one of them less likely.

Given Malaria's highly detrimental effect on humanity, there have been efforts to eradicate it as soon as people found out how it works. For a long time the most efficient means was avoiding contact with mosquitoes, but once DDT was developed the mosquitoes themselves could be targeted. Aggressive efforts in the US

and Europe quickly got rid of a disease whose name comes from medieval Italian and whose prevalence in the US South has been cited as one of the reasons for the use of African instead of Native American slaves. Unfortunately, corruption, stopping too early and several other factors have caused those efforts to be much less successful in most of the global south and some countries even had a resurgence of malaria after it was believed to be eradicated. By the 1970s the WHO had decided to change strategy and now eradication was not the official end-goal any more. Since then several private and public institutions (including the Bill and Melinda Gates Foundation) have invested millions of dollars into preventive measures as well as the search for better cures and vaccines. Even the poorest countries have aggressive programs to combat stagnant water (the breeding grounds for mosquitoes) and fumigate dwellings if an outbreak occurs. Still, a lot of wealth is lost and gigantic human suffering is caused by the premature deaths and the people who are afflicted by the disease in the prime of their youth. Recently, with the development of Crispr and genetic manipulation, humanity has been given a new hope to eradicate Malaria. Project Needlenose developed a strain of mosquitos which are resistant to Plasmodium, which, if released into wild mosquito populations, could spread this resistance, and thus reduce or eradicate human infections. However, while exciting, this new technology poses unknown risks, and the scientific community is debating whether or not to use the technology.[8]