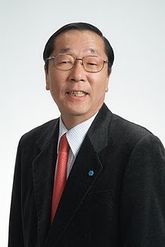 It is currently unknown what kind of effect this pose has on water crystals.

Masaru Emoto™[1] (江本 勝) (1943–2014)[2]) was a Japanese author and peddler of pseudoscience, most famously the idea that thoughts and words directed at water change the aesthetic appeal of the water crystals.

He held a "Doctorate" in alternative medicine from a correspondence course from the Open International University of Alternative Medicine,[3][note 1] and therefore called himself "Doctor."

Emoto's work has largely been neglected by mainstream scientists, although a few have pointed out the obvious lack of controls and subjective nature of the photographing processes that completely negate his claims. He also refused James Randi's million-dollar prize to redo the experiment with proper double-blind conditions. Emoto did not particularly care about science though; he was primarily interested, of course, in selling his books, promoting his expensive "seminars" and "lectures", and selling overpriced water.

Emoto's take-home message was that the battle for water's soul is a reflection of humanity at large, and that water crystal conversion to the good side of the force is a global imperative.

Of course, one minor problem with this thinking is that crystalline water is more commonly known as ice or snow.

The power of nationalism over water[edit]


The effect of the Malaysian national anthem on water crystals.