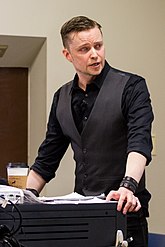 The Satanic Temple is a group of Satanists that are active with social and political issues surrounding religious freedom, including their current mission to get a statue of Satan erected outside the Oklahoma state capitol building.

The Satanic Temple is an atheistic organization, and does not believe in a literal Satan, though some of its members are theistic Satanists. This has been brought up in the assessment of whether or not they actually are a religion, and they have responded by stating that this belief is outdated and ignorant, saying that to define religion as supernatural is to give the enemy free license to label as they please.[citation needed]

They have a set of seven fundamental tenets founded on ideas of secular humanism, freedom and reason and are listed below.[1]

(Sounds a few steps ahead of LaVeyan Satanism.)

The Satanic Temple has launched Satanic after school clubs.

Satan clubs will only be in areas and schools where there are already after school Bible study groups. Schools cannot discriminate by banning Satan clubs while allowing Bible study, or they will risk legal action over the First Amendment.[3] A legal expert for Liberty Counsel said Satan Clubs have a First Amendment right to exist, but later threatened to sue. The Satanic Temple, by contrast, maintains that, without studying the curriculum of the Satan Clubs, the Liberty Counsel's actions are premature.[4] According to Hemant Mehta, the Liberty Counsel has misrepresented the Satan clubs[5] (though the group may arguably have courted such misrepresentation by using such an inflammatory name). The Satan clubs are looking for donations.[6] Legal action is considered in one Georgian district because the authorities have ignored repeated requests to start a Satan Club.[7] Future developments could be interesting. A district in Washington state decided they have to allow the Satan clubs.[8] The first After School Satan Club has opened in Portland, Oregon in mid-November 2016 with Christian protesters outside.[9] A second has opened in Utah and more are promised. [10]

The Satanic Temple is best known in the media for its publicity stunts done in the interest of protecting church-state separation, in a manner similar to Pastafarianism. They're responsible for a number of the antics such as attempts to have a statue of Baphomet displayed wherever Christian symbols are shown on government property.[11] As a result, they have become quite popular with the atheist community. Their spokesperson, Lucien Greaves (real name Doug Mesner), has appeared on shows like The Friendly Atheist podcast and others.[12]

In early 2016, the Satanic Temple wanted to give an invocation at the city council of Phoenix, Arizona. Some councilors wanted only a rota of council-approved clergy to give invocations. The Freedom From Religion Foundation planned legal action if the First Amendment was breached.[13] Phoenix chose a moment of silence instead, but legal action was threatened from Christians who wanted explicitly Christian prayer in government.[14][15]

The Satanic Temple has started a campaign against corporal punishment in American schools; this is apparently legal in nineteen states with 110,000 children being beaten per year.[16]

The campaign uses an argument based on the first amendment's guarantee of freedom of religion. The Satanic Temple argues that corporal punishment violates the Satanic Temple's belief in a inviolable body and intends to argue on these grounds for anyone who registers for them.[17].

After the Supreme Court didn't block Texas's ban on abortion after six weeks, the Satanic Temple was involved in activism to fight the law. They claim that body autonomy is an important part of their beliefs and have developed an abortion ritual. They plan to fight the ban on religious freedom grounds, including using the Religious Freedom Restoration Act, a federal bill that does things like protecting certain Native American groups' right to use peyote, as grounds for protection of Satanic Temple members' right to use abortifacients (substances that induce abortions).[18]