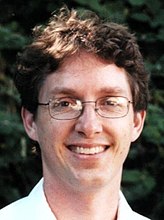 Richard Carrier (1969–) is an American historian, author and atheist. Carrier strongly advocates atheism, especially Atheism Plus,[2] as well as metaphysical naturalism. Carrier openly doubts the historicity of Jesus. He has also written of his doubts on Hitler's Table Talk,[3] a collection of private conversations between Adolf Hitler and his confidants which suggest that Hitler was an atheist (despite years of personal affirmations to Christianity in speeches and books), citing authors' bias, differing accounts, and problems with translations between German, French, and English.

In June 2014, Carrier's On the Historicity of Jesus was claimed to be "the first comprehensive pro-Jesus myth book ever published by a respected academic press and under formal peer review".[4][5]

Carrier's reputation within the atheist community was largely brought to an end due to allegations in court of sexually exploiting his students followed by his repeatedly lying about the topic right up until the present. According to his 2020 CV, he does not appear to have taught in any post-secondary institution since 2000.[6]

Carrier knows five languages, comes from a freethinking Methodist family, and was married to Jennifer Robin Paynter (1995-2015) until he came out as polyamorous. He served in the United States Coast Guard for two years (1990-1992). He has a Ph.D. in Ancient History from Columbia University (2008). Among other organizations, he's a member of the Freedom From Religion Foundation.

Carrier is a prolific writer. If there's an argument for the existence of God, or against atheism, he has probably thoroughly debunked it in his books, on blogs, or in public speaking events. He is known to give positive arguments for the conclusion that there is no god (strong atheism).

The importance of Philosophy itself is covered in the introduction to Sense and Goodness Without God: A Defense of Metaphysical Naturalism, and in a Skepticon talk entitled "Is Philosophy Stupid?"[7]

Carrier defines the supernatural as irreducible mind (spirit) or mental property, often with direct causal powers (magic) all without underlying physical causes.[8] This is basically the mind stuff from dualism. He presents evidence that this is the definition most people actually use in practice.

Carrier is an independent author and researcher not attached to any academic institution. His book On the Historicity of Jesus was published by an academic press, though the peer review process of it has come under scrutiny, as Carrier chose his reviewers, producing a biased outcome.[10] The claim that it is the first peer-reviewed comprehensive mythicist work is likewise incorrect, since Jean Magne's 1993 title From Christianity to Gnosis was published by Brown University through Scholars Press in the Brown Judaic Studies series, and argued that Christianity had a gnostic origin with no historical founder, a full twenty years before Carrier's case was made.[11]

Carrier is a proponent of the idea that Jesus never existed as a historical figure in any meaningful way. He uses Bayesian logic to claim that since religious figures with characteristics similar to Jesus did not exist, then probably neither did Jesus.

The non-existence of Jesus is a respectable but minority position among scholars. Carrier's application of Bayes's Theorem to the question has not been widely accepted.

On the Historicity of Jesus got a book review in the December 2014 issue of Journal of Religious History.[12] An earlier version of this review states:

As a result, this work far outdoes anything the typically-amateurish mythicists have produced to date, but is also methodologically superior to the work of more respected and mainstream historicist scholars. (...) On the Historicity of Jesus is clearly and convincingly argued, extensively researched, solidly referenced, and is essential reading for those open to questioning the historical Jesus, and to those who want to learn how historical theorising ought to be done."[13]

To date, Lataster's review remains the only one to condone Carrier's methods and conclusions in academic literature.

Carrier has sexually harassed a number of women, which led to him getting the perma-ban from Skepticon.[14] As the official affidavits have shown, he demonstrated his clear intellectual dishonesty by attempting to trade sex for a recommendation letter.[15] He since attempted to then sue the people who ousted him as a sexual deviant and an abuser who used his prominent position in the atheist community to get sex, including his attempts to hit on married women. This all occurred while Carrier himself was married, thus he was cheating on his wife in addition (honest person right?). He then tried to "come out" as polyamorous, despite the fact that this isn't a sexual orientation and doesn't exempt him of being a horrible human being.[16]