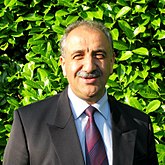 Mehran Tavakoli Keshe (1958–) is the claimed inventor and popularizer of a wide array of unproven technologies, ranging from "overunity systems" (perpetual motion) and free energy devices, to anti-gravity devices (along with a corresponding space program), to treatments for various diseases like cancer and ALS.

Keshe's mythology appears to begin in 2011 with unverified claims by the Iranian Government that it had built a functioning flying saucer.[1] In January 2012, Keshe claimed not only that he had developed the technology behind the flying saucer but that said saucer had been utilized to shoot down a US drone.[2]

In 2014, Keshe claimed that he had developed technology that was being used in Fukushima[3] to clean up radioactive contamination. In a 45 minute video[4] posted on the Keshe Foundation's YouTube channel, he explained his proposal for using magnets to absorb radioactive isotopes. To date there is no evidence that said techniques were used in the clean up of Fukushima or that such a thing would even work.

Keshe's main foray into the world of free energy devices is his Magrav Generator. Currently sold on his website for €1,800,[5] it boasts of the ability to power "multiple appliances with no support from the main power grid of the house".

Amateur tests[6] of the device showed it either did not reduce power consumption for connected devices or single digit percent reduction in power consumption. More disturbingly, teardowns of the device[7] showed the internals simply consisted of coils of oxidized copper wire inside a plastic shell.

Keshe has made various medical claims over the years, stating that he has technology capable of curing cancer, ALS and other diseases. In 2016 his foundation promoted his technology in Norway.[8]

In 2016, he began selling dietary supplements, lotions and eye drops[9] that could treat a number of diseases including aging, wrinkles and glaucoma. The products are no longer listed on his site but a copy of the video announcing the sale is online.[10]

His unifying theory and explanation for his free energy devices, anti-gravity technology and medical claims is something Keshe refers to as Magrav. In an early video,[11] Keshe explains that the theory behind Magrav is that gravity is created by magnetic fields. This is in conflict with mainstream theories of gravity and electromagnetism.

Keshe's technology also relies heavily on what he refers to as plasma. The foundations websites contains explanations of their theories about plasma,[12] where it is described as a panacea with applications in health, propulsion, agriculture and psychology.[13]

Another thing mentioned often by the group is GANS. GANS is an acronym for Gas in A Nano State, it refers to what they believe are nanoparticles of "solid gas".[14] As if the concept of a solid gas isn't confusing enough, in much of their material, they give examples of GANS such as zinc oxide or copper oxide,[15] which mainstream chemistry regards as solids.

In 2016, Keshe began accepting applications for training astronauts. The cost of submitting an application[16] was a mere €10,000.